US senator wants a role for Congress in Iran nuclear talks 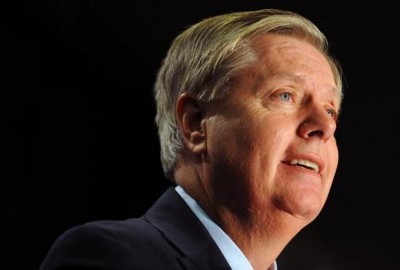 When it comes to nuclear negotiations with Iran, Sen. Lindsey Graham wants Congress to have the last word.

On the Senate floor Thursday, the South Carolina Republican argued for legislation that would require President Barack Obama to submit any diplomatic agreement on the Iran’s nuclear program to Congress for approval.

“I can’t imagine the Senate and the House sitting on the sidelines and ignoring something this important,” Graham said.

Graham, elected last week to a third term, tried unsuccessfully to bring the Iran Nuclear Negotiations Act of 2014, which is now Senate Bill 2650, to a full roll call vote on the first day of the Senate’s lame duck session. He co-wrote the bill with several Republican allies, including Sens. Kelly Ayotte of New Hampshire and John McCain of Arizona.

The bill would require the Senate and House Foreign Relations committees to review any potential deal before it would go to Congress for an up-or-down vote.

Under the measure, no State Department funds would be available to implement an agreement if the president failed to submit the plan to Congress on time or if Congress rejected the agreement.

“This is not the time to let President Obama go it alone,” Graham said. “The stakes are too high for Israel, for the United States, for the world at large.”

He asked for the legislation to skip further committee discussion and go to a floor vote. However, Sen. Christopher Murphy, D-Conn., blocked Graham’s legislative maneuver.

“There’s going to be a legitimate question of what Congress’s role is,” Murphy said. “But we won’t know that until we see the (negotiated) agreement.”

Murphy said the bill would undermine negotiations with Iran at a critical point in the process.

“It would send a fairly chilling message to our negotiators and those who are in the room,” he said.

Sen. Bob Corker, R-Tenn., argued that the Obama administration might be too eager to close a deal with Tehran.

“It appears they want something to happen that possibly will not stand the test of the time,” said Corker, who is also a co-author of Graham’s bill.

Corker, who will likely become the chairman of the Senate Foreign Relations Committee in January, said temporarily suspended sanctions would be difficult to reinstate if the Iranians did not stick to an agreement.

The deadline for a final deal with Iran is Nov. 24. Both Corker and Graham had expressed hope the bill would be voted on before the deadline.

Graham has long been skeptical of Iran and its nuclear intentions.

“We do not want to allow the Iranians, given their behavior, a capability one day to develop a nuclear weapon,” Graham said.

Comparing Iran to pariah state North Korea, he warned a nuclear Iran could be dangerous to regional and world security.

“If [Iran] is truly a North Korea in the making, we’ll have a chance to stop it.”