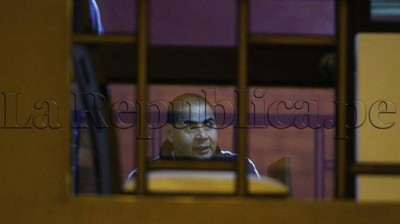 A Lebanese man who Peru alleges belongs to Hezbollah and was possibly plotting a bomb attack in Lima denied links to the Shi’ite Islamic group’s military arm on Thursday and said police coerced a confession from him.

Judge Angel Mendivil ordered Muhumad Ghaleb Hamdar, 28, be detained for up to 18 months in prison while prosecutors carry out an investigation and prepare charges against him.

So-called preventive prison terms for suspects awaiting trial are common in Peru and aim to keep them from fleeing.

Prosecutor Wendy Calero said that Ghaleb Hamdar told police he had been gathering information for Hezbollah, and said that traces of nitroglycerin, an explosive liquid, and pictures of Lima’s airport were found in his belongings.

He said police only allowed him to sleep two hours per day and kept him in uncomfortable positions during interrogations over eight days.

“They told me that if you’re not going to collaborate with us we’re going to arrest your wife now,” Ghaleb Hamdar said in court, adding that police promised to deport him if he confessed.

Ghaleb Hamdar, whose wife is Peruvian, was arrested at a home in the residential neighbourhood of Surquillo in Lima on Oct. 28.

Authorities have not said why they initially flagged him as dangerous, but said forensics had turned up explosive materials and plastic gloves in his trash prior to his arrest.

Ghaleb Hamdar said he often used plastic gloves to handle charcoal for smoking hookah, a Middle Eastern bubble pipe. “I smoke every day, everyone knows that,” he said.

The United States has designated Hezbollah a foreign terrorist organisation since 1997.