Islamic State has a new jihadist ally in Egypt 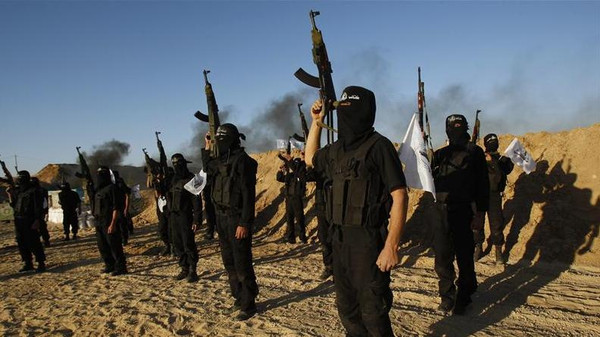 Ansar Beit al-Maqdis, a jihadi organization based in the northern part of the Sinai Peninsula that has carried out several attacks targeting Egyptian security forces, has pledged allegiance to the Islamic State group.

The announcement reflects the growing regional appeal of the Islamic State, a radical al Qaeda breakaway group that has carved out a self-styled caliphate in Syria and Iraq and demanded the loyalty of the world’s Muslims.

The announcement pledging loyalty to Islamic State leader Abu Bakr al-Baghdadi came in an audio speech posted late Sunday on the Egyptian militant group’s official Twitter account and a militant website. Last week the group had denied on its Twitter account reports saying it had pledged allegiance to al-Baghdadi.

The unknown speaker in the recording released Sunday says Ansar Beit al-Maqdis decided to join the Islamic State group, “whose emergence resembles a new dawn raising the banner of monotheism.”

The speaker said that al-Baghdadi was “chosen by God” to establish a new Islamic caliphate after “Muslims suffered decades of humiliation.”

“Therefore, we have no alternative but to declare our pledge of allegiance to the caliph… to listen and obey him… and we call on all Muslims to pledge allegiance to him.”

The speaker went on to urge Egyptians to rise up against what he called “the tyrant,” apparently referring to President Abdel-Fattah el-Sissi, who was elected president earlier this year after leading the military overthrow of Islamist President Mohammed Morsi in July 2013 amid massive protests demanding his resignation.

Since then Sinai-based militants have carried out scores of attacks mainly targeting soldiers and police, including a co-ordinated assault last month on an Egyptian army checkpoint that killed 31 troops.

No known group has claimed responsibility for the attack, which prompted the army to declare a state of emergency in parts of northern Sinai, where radical groups have long tapped into local grievances. The attack also led the army to begin demolishing homes along the Sinai border with the Gaza Strip in order to combat smuggling tunnels.

“What are you waiting for, after your honour has been aggressed upon and your sons’ blood has been shed at the hands of this tyrant and his soldiers?” the audio statement said.

“Peaceful means and infidel democracy are not of any benefit to you,” it added in an apparent reference to Morsi’s now-banned Muslim Brotherhood group, which won a series of elections following the 2011 uprising that toppled long-ruling autocrat Hosni Mubarak but later alienated many Egyptians, who accused it of monopolizing power.

Iraqi officials on Sunday said al-Baghdadi was wounded in an Iraqi airstrike in the town of Qaim in the western Anbar province as he was meeting with militants. Pentagon officials said they had no immediate information about such a strike or on Baghdadi being wounded. There has been virtually no comment on the matter on jihadi websites.