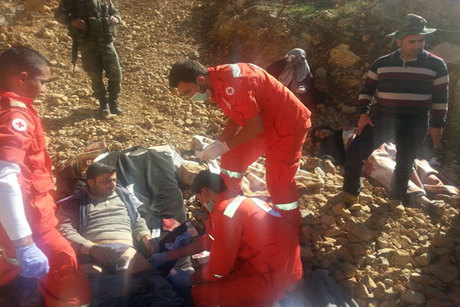 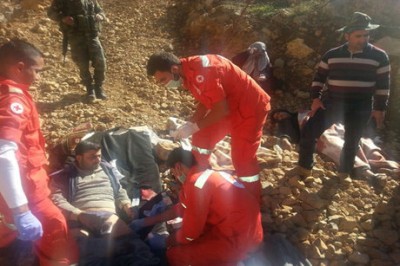 Contrary to what has been reported  the Lebanese army on Friday  allowed Red Cross medics to treat a number of wounded  Syrian people in the Syrian heights of Mount Hermon near the Lebanese town of Shebaa,  where heavy clashes had taken place between pro- and anti-Syrian government fighters  despite a decision taken by the government last month not to accept any more refugees from the neighboring state.

“The Lebanese army allowed the International Committee of the Red Cross to treat seven wounded Syrians in the heights of Mount Hermon,” Turkey’s Anatolia news agency quoted a security source as saying.

New TV (Al-Jadeed)  television for its part broadcast pictures of Red Cross medics offering first aid to a number of wounded people in the mountainous region.

NNA said that Syrian factions tried to bring the wounded to Lebanese hospitals from the heights of Mount Hermon.

But they had to go back to the Syrian town of Beit Jinn after troops stopped them at the border, the agency added.

The government announced on October 23 that it would not accept any more refugees from Syria, except in what the authorities deem to be “exceptional” humanitarian cases.

Another 6 million have been displaced within Syria, making it one of the world’s worst humanitarian crises.