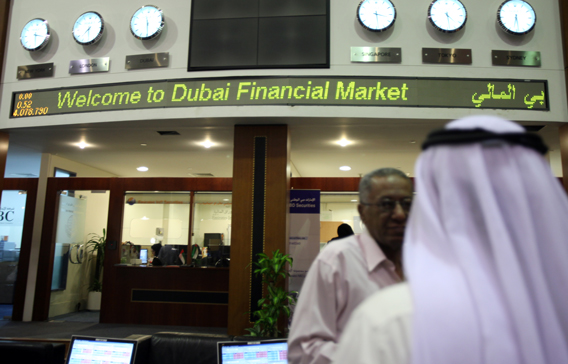 Dubai’s stocks fell the most among global markets as oil extended declines while Saudi shares slumped amid heightened security concerns.

The benchmark DFM General Index (DFMGI) dropped 3.3 percent, the most in three weeks, to 4,400.80 at the close. That’s the steepest slide among 93 gauges worldwide tracked by Bloomberg so far today. Saudi Arabia’s Tadawul All Share Index lost 1.6 percent for the third-worst decrease, taking its two-day decline to 5.1 percent.

Brent crude sank to $82.31 a barrel at 4:35 p.m. in Dubai, the lowest level since October 2010, extending the bear market reached last month on signs the biggest OPEC producers are discounting prices to keep market share. Saudi Arabia’s state-owned producer lowered its charges to the U.S., where production is the highest in three decades. The six-nation Gulf Cooperation Council that includes Saudi Arabia and the United Arab Emirates holds about a third of the world’s proven oil reserves.

“The markets are reacting to the continued decline in oil prices because their economies are highly dependent on oil,” Tariq Qaqish, the head of asset management at Dubai-based Al Mal, said by phone from Dubai. “Also, yesterday’s drop in Saudi Arabia’s market, which is the biggest in the region, is affecting the sentiment throughout the Gulf. If you couple this with security concerns in the region, you get this selloff.”

Saudi Basic Industries Corp., the world’s biggest petrochemicals maker, retreated 2.9 percent to 102.63 riyals, the lowest in a year. Etihad Etisalat Co. (EEC) plunged 9.7 percent in Riyadh, bringing its two-day decline to 19 percent after the Saudi market regulator started a probe into possible violations of rules by the phone operator in disclosing quarterly results.

The selloff followed the death of two Saudi security personnel amid nationwide arrest raids in response to an attack in the oil-rich east. Masked gunmen attacked Shiite villages on Nov. 3, killing at least five.

Saudi Arabia, the U.A.E., Bahrain and Qatar are part of the U.S.-led military coalition against the Islamic State in Syria. The U.S. Consulate in Dubai warned U.S. citizens in the U.A.E. by e-mail to “remain vigilant” regarding their personal security.

“The political situation following the attack in al-Ahsa had negative implications on the market,” Mohammed al-Omran, a financial analyst and president of the Gulf Center for Financial Consultancy in Riyadh, said by phone.

“If Brent breaks below $80 a barrel, it’s going to be a sharp decline for the regional markets,” Hisham Khairy, the Dubai-based head of institutional trade at Mena Corp. Financial Services LLC, said by phone.