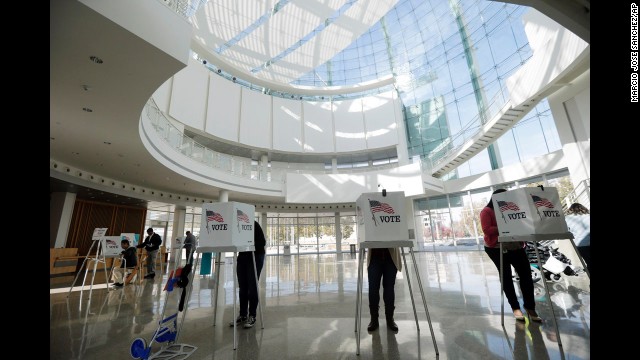 A majority of Americans are dissatisfied or angry with President Barack Obama’s administration and GOP leaders, according to exit polls released Tuesday and analyzed by CNN.

And about 8 in 10 Americans disapprove of how Congress is handling its job, according to a survey of voters outside of polling places on Election Day.

Who are the midterm spoilers?

Nearly six in 10 voters are either dissatisfied or angry with both the White House and Republican leaders in Congress. Less than a third of Americans are satisfied with the Obama administration and GOP leaders.

And heading into the voting booth, seven in ten Americans said they were concerned about economic conditions.

Most voters had a negative view of both parties, with the Democratic Party barely edging out the GOP to pull a positive view from 44% of voters compared to 40% for the Republican Party.

And after an election that has played up government dysfunction and crises both at home and abroad, exit polls reveal that voters are concerned and anxious about the current state of the country and the direction it is headed.

Two-thirds of voters said they believe the country is headed on the wrong track, and only 22% believe the next generation of Americans will be better off.

And about 72% are at least somewhat worried that there could be a terrorist attack on U.S. soil.

Ebola: Ebola also hit the campaign trail this season and about six in ten Americans said they followed news about Ebola. And only about 44% of Americans believe the federal government has done a good job combating the disease.

ISIS: The threat of ISIS has also been played up by some Senate candidates, and a majority of Americans surveyed Tuesday support airstrikes against the militant group in Iraq and Syria.