Malaysia Airlines Flight 370 search area[/caption]A Malaysian family is suing the government and beleaguered national carrier for negligence in the mysterious disappearance of flight MH370, in what is believed to be the first lawsuit filed over the disaster.

The suit was filed by lawyers on behalf of the two underage sons of Jee Jing Hang, who was on board the ill-fated Malaysia Airlines flight.

Gary Chong, a lawyer for Jee’s relatives, said the suit was filed in a Malaysian court on Friday.

The family is suing Malaysia Airlines for breach of contract, saying the deeply troubled carrier failed in its contractual responsibility to deliver Jee to his destination.

“Our clients are after the truth. We have confidence in our judiciary system that this suit will be heard and dealt with fairly,” a statement by the family’s legal team said.

Chong said the family would seek damages but declined to specify a figure.

MH370 inexplicably disappeared on March 8 with 239 people aboard en route from Kuala Lumpur to Beijing in what remains one of history’s great aviation mysteries. 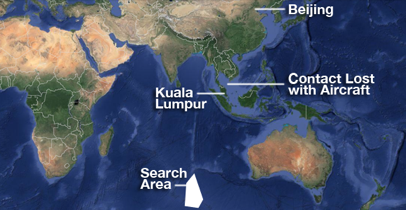 Malaysia’s government believes the flight diverted to the far southern Indian Ocean, citing sketchy satellite data, but no trace has been found despite an extensive search.

Neither the government nor airline has revealed any results from investigations launched in the aftermath of the tragedy, and consistently stresses that only recovery of the lost Boeing 777 aircraft will provide full answers.

Some next-of-kin bitterly accuse the government and airline of a bungled response and cover-up, charges that are strenuously denied.

Malaysia’s air force came under particular fire after top brass acknowledged military radar had tracked the red-eye flight as it doubled back over Malaysian airspace after diverting.

The air force took no action, saying the radar blip was not considered a security threat.

The chances of success for the lawsuit were not immediately clear.

Aviation experts say that under international law it is an airline’s responsibility to prove it was not to blame for an accident.

The lack of evidence could complicate that task for the carrier.