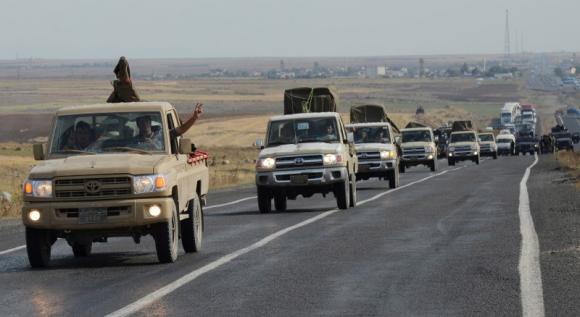 A convoy of Kurdish Iraqi peshmerga vehicles makes its way to the Turkish-Syrian border, near the town of Kiziltepe, in the southeastern Mardin province October 29, 2014. REUTERS/Stringer
Share:

Iraqi peshmerga fighters arrived in southeasternTurkey on Wednesday en route for the Syrian town of Kobani to try to help fellow Kurds break an Islamic State siege which has defied U.S.-led air strikes.

Kobani, on the border with Turkey, has been under assault from Islamic State militants for more than a month and its fate has become a test of the U.S.-led coalition’s ability to combat the Sunni insurgents.

Weeks of air strikes on Islamic State positions around Kobani and the deaths of hundreds of their fighters have failed to break the siege. Syrian Kurds and their international allies hope the arrival of the peshmerga, along with heavier weapons, can turn the tide.

A Turkish Airlines plane touched down in the southeastern city of Sanliurfa at around 1:15 a.m. (2315 GMT) amid tight security, a Reuters correspondent said. A convoy of white buses escorted by armored jeeps and police cars left the airport shortly afterwards.

“They will be in our town today,” Adham Basho, a member of the Syrian Kurdish National Council from Kobani, said of the peshmerga, confirming that a group of between 90 and 100 fighters had arrived in Sanliurfa overnight.

A separate group of peshmerga is traveling to the Turkish border region by land with heavier weapons. A Kurdish television channel showed footage of what it said was a convoy of peshmerga vehicles loaded with weapons en route to the area.

Crowds gathered in the main square of the Turkish border town of Suruc amid a heavy police presence as Turks and Syrian refugees came out hoping to catch a glimpse of the convoy.

Saleh Moslem, co-chair of the Syrian Kurdish Democratic Union Party (PYD), said the peshmerga were expected to enter Kobani — known as Ayn al-Arab in Arabic — later on Wednesday and would bring heavy arms with them.

“It’s mainly artillery, or anti-armour, anti-tank weapons,” he said. The lightly armed Syrian Kurds have said such weaponry is crucial to driving back Islamic State insurgents, who have used armored vehicles and tanks in their assault.

Hemin Hawrami, a senior official in the Kurdistan Democratic Party in Iraq, wrote on his Twitter feed that peshmerga fighters were just a few kilometers from Kobani and would enter soon.

Islamic State has caused international alarm by capturing large expanses of Iraq and Syria, declaring an Islamic “caliphate” erasing borders between the two, and slaughtering or driving away Shi’ite Muslims, Christians and other communities who do not share their ultra-radical brand of Sunni Islam.

Fighters from the Nusra Front, al Qaeda’s official affiliate in the Syrian civil war, have meanwhile seized territory from moderate rebels in recent days, expanding their control into one of the few areas of northern Syria not already held by hardline Islamists.

In Iraq, security forces said they had advanced to within 2 km (1.2 miles) of the city of Baiji on Wednesday in a new offensive to retake the country’s biggest oil refinery that has been besieged since June by Islamic State.

Islamic State fighters have threatened to massacre Kobani’s defenders in an assault which has sent almost 200,000 Syrian Kurds fleeing to Turkey, and triggered a call to arms from Kurds across the region.

The U.S. military conducted 14 air strikes on Tuesday and Wednesday against Islamic State in Syria and Iraq, according to a statement from U.S. Central Command. Eight of the strikes were near Kobani, destroying a small Islamic State unit of fighters, a “command and control node” and other buildings, vehicles and fighting positions for the militant group.

At least a dozen shells fired by Islamic State fighters fell on the town overnight as clashes with the main Syrian Kurdish armed group, the YPG, continued, according to the Britain-based Syrian Observatory for Human Rights.

It said preparations were being made at a border gate which Islamic State fighters have repeatedly tried to capture for the arrival of the peshmerga, while YPG and Islamic State forces exchanged fire in gun battles on the southern edge of the town.

The Observatory also said 50 Syrian fighters had entered Kobani from Turkey with their weapons, though it was unclear which group they belonged to. Turkey has pushed for moderate Syrian rebels fighting President Bashar al-Assad to join the battle against Islamic State in Kobani.

Rebel commander Abdul Jabbar al-Oqaidi said he had led 200 Free Syrian Army (FSA) fighters into Kobani but there was no independent confirmation of this. The FSA describes dozens of armed groups fighting Assad but with little or no central command and widely outgunned by Islamist insurgents.

“PARTNER ON THE GROUND”

The Iraqi Kurdish region’s parliament voted last week to deploy some peshmerga to Syria and, under pressure from Western allies, Turkey agreed to let peshmerga forces from Iraq traverse its territory to reach Kobani.

“We’ve advocated and been discussing the importance of allowing the peshmerga across the border and the facilitation of that,” U.S. State Department spokeswoman Jen Psaki said in Washington on Tuesday.

“This is one component. It’s certainly one that we felt would be impactful and be important to have a partner on the ground to work with,” she said.

The United States and its allies in the coalition have made clear they do not plan to send troops to fight Islamic State in Syria or Iraq, but they need partners on the ground to capitalize on their air strikes.

“What does Kobani show? That determined resistance on the ground with American air power can push ISIS back,” Henri Barkey, a former State Department official who now teaches at Lehigh University, told Reuters.

“They want to carry this to Iraq so that the peshmerga and Iraqi army get their act together. They really need to win … They realized this was an opportunity for them because you have a real fighting force on the ground … That’s the model.”

Kurdistan’s Minister of Peshmerga, Mustafa Sayyid Qader, told local media on Tuesday that no limits had been set to how long the forces would remain in Kobani. The Kurdistan Regional Government has said the fighters would not engage in direct combat in Kobani but rather provide artillery support.

Turkish officials have rebuffed international criticism over their reluctance to do more to help Kobani’s beleaguered Kurdish defenders, whom they accuse of being linked to the militant Kurdistan Workers’ Party (PKK), which has fought a decades-long insurgency against the Turkish state.

Ankara fears Syria’s Kurds will exploit the chaos by following their brethren in Iraq and seeking to carve out an independent state in northern Syria, emboldening Kurdish militants in Turkey and derailing a fragile peace process.

The stance has enraged Turkey’s own Kurdish minority — about a fifth of the population and half of all Kurds across the region. Kurds suspect Ankara, which has refused to send in its forces to relieve Kobani, would rather see Islamic State jihadists extend their territorial gains than allow Kurdish insurgents to consolidate local power.

Police shot into the air and fired teargas to disperse hundreds of Kurdish supporters gathered at the Habur border gate overnight to welcome the arrival of the peshmerga after they began throwing stones into a police compound.

Turkish Prime Minister Ahmet Davutoglu said on Tuesday that air strikes alone would not be enough to push back the insurgents and that only the peshmerga and moderate Syrian rebel forces could oust Islamic State from Kobani.