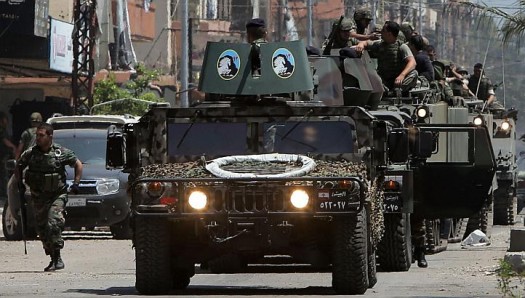 The clashes in the  northern capital Tripoli  between the army and the Islamic militants ended. The   army is now in full control of the city and has deployed everywhere  , but sporadic gunshots  are  heard   every now and then, MTV reported on Monday,

“The operation is over and the army is entering areas where the militants  were entrenched in order to clear them,” Samir Jisr, a prominent Sunni politician from Tripoli, told Reuterson Monday.

The new development came about after the Lebanese commando forces, backed by helicopter gunships, seized the headquarters of  al Qaeda linked Islamist militant commander Shadi Mawlawi and his partner Osama Mansour Monday, on the fourth day of clashes that have rocked Lebanon’s second largest city.

Media reports said that the four days of  battles between the Lebanese troops and militants in Tripoli and the northern district of Minyeh resulted  in the killing of  at least 11 soldiers, 23 militants  and eight  civilians and  more than 100 people wounded, in the worst spillover of the war in Syria into Lebanese territory since early August, when Islamist insurgents affiliated with  the Nusra Front and Islamic State staged an incursion into the border town of Arsal and took around 20 soldiers captive. Three have been executed.

Prime Minister Tammam Salam, who pledged full political support for the Army in its battle against terrorism Sunday, chaired a security meeting Monday at the Grand Serail in Beirut with the heads of several security bodies.

The Lebanese army vowed not to negotiate any deals with the Islamic  militants.

The Syrian crisis has triggered Lebanon’s worst instability since the 1975-90 civil war  and has sharply divided the country  along sectarian lines, with Sunnis supporting  the Syrian revolution and Shi’ites backing President Bashar al-Assad. Political conflict has left Lebanon without a president since last May 25  when the term of President Michel Suleiman expired.

It was not immediately clear where the gunmen had gone. Security sources reported that  some may have left with the civilians.

Lebanon’s deeply divided politicians  have  all condemned the violence in Tripoli, Lebanon’s second largest city and a historic base for Sunni Islamist groups.

The exact  affiliations of all the militants  taking part in the clashes  with the army were not immediately clear. Security sources said  they include both Lebanese and Syrian supporters of the  Sunni Islamist groups Islamic State and the Nusra Front.

The Nusra Front is the Syrian affiliate of al Qaeda. Islamic State is an al Qaeda offshoot that controls swathes of both Syria and Iraq, targeted by a U.S.-led campaign of air strikes in those two countries.

The Nusra Front has threatened to   execute the  Lebanese soldiers that it took as  captives during the Arsal incursion in retaliation  to the Lebanese army operation in Tripoli.