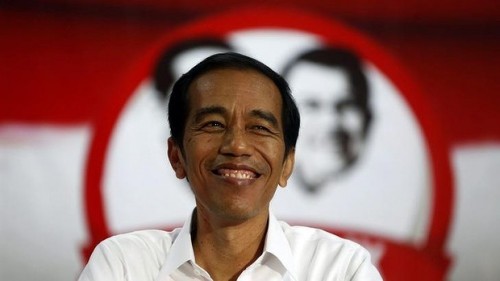 Joko “Jokowi” Widodo was sworn in as Indonesia’s president Saturday, capping an improbable journey to the top for a diminutive outsider. And it ranks as one of the most optimistic pieces of global news in recent years, at least for those who’ve been paying attention.

The sprawling archipelago that is Indonesia – the distance from its northwestern tip on Sumatra to its southeastern reach on New Guinea is equivalent to the distance from London to Baghdad – is usually an odd afterthought in US news coverage. Though it is among the world’s biggest producers of pulp and paper, palm oil, coal, and a host of other commodities; has a population of over 250 million people (mostly Muslims); and has made one of the world’s most impressive transitions to democracy in the past decade, unless Islamist militants are blowing up things there, it rarely makes the news.

But the bare-knuckle fight for leadership of Indonesia provided a stark choice for voters. On one hand, Jokowi, an entrepreneur with a common touch who rose in politics as mayor of his hometown on Java, the most populous island, and later the capital, Jakarta by promising – and delivering – better services and cleaner governance. On the other, Prabowo Subianto, a retired general who hailed from one of Java’s elite families, had participated in some of the most notorious human rights abuses under former dictator General Suharto, a US-backed anti-communist, and had crafted his presidential campaign around hyper-nationalistic promises of restoring Indonesian national “greatness.”

A year ago in the spring I returned to Indonesia after a decade and dug into the background of this political upstart in his hometown of Solo (Surakarta), even then being tipped as the next president. I met with local businessmen, government employees who’d worked under Jokowi, and residents of some of the same riverside slums he grew up in. And the story was always the same: Most honest politician ever met, give you the shirt off his back, incorruptible etc. I joked at a time it had an air of “The Manchurian Candidate” about it (in the movie people are brainwashed to say that a candidate for high office was “the kindest, bravest, warmest, most wonderful human being I’ve ever met in my life.”)

But in Solo, the feeling was real. A group of street level peddlers told of how the government wanted to evict them from the streets. They braced for the inevitable attack from the combination of street thugs and police that have traditionally been used in land disputes across the country. Instead, then mayor Jokowi spent weeks holding meetings with the peddlers, listened to their problems, and acquired a plot of land for them to conduct business on that satisfied everyone. Practical, and simple? Yes. But exceedingly rare in the politics of Indonesia and many other places.

Jokowi’s lack of haughtiness, in a political culture that’s traditionally favored an air of detachment and nobility, also worked in his favor. While Prabowo staged campaign rallies where he imperiously reviewed paramilitary supporters from horseback Jokowi was happy to press the flesh with supporters on the streetsin a t-shirt or compete in sack races. The contrast wasn’t subtle:

And this really is a case where a picture tells a thousand worlds. Prabowo was groomed from an early age to lead the country, and for a number of years in the 1990s seen in some quarters as a presumed successor ofSuharto, his father-in-law (the marriage has since ended.) Moreover, he had the wealth of his tycoon brother Hashim Djojohadikusumo behind him, and had loyally served Soeharto’s “New Order,” the regime that came to power after a coup and bloody purge of alleged communists in 1965-66. The bloodshed left some 500,000 people dead and cast a pall of fear over Indonesian politics for more than a generation.

The campaign Prabowo ran against this upstart was also a dirty one. It included the spread of rumors that Jokowi was secretly a Singaporean Chinese and a Christian (just as opponents tried to smear Barack Obama, to whom Jokowi is often compared to Indonesia, as a secret Muslim and aKenyan during his campaign.) After his loss was ratified, Prabowo briefly challenged the defeat, claiming that the presidential election was more corrupt than a North Korean one.

Jokowi overcame all of this to become the country’s first leader from outside the establishment since independence in 1945 – and he could be someone who consolidates the democratic gains Indonesia has made since Suharto was ousted by mass protests in 1998, during which Prabowo allegedly arranged for the torture and disappearances of democracy activists.

The post-Suharto transition was hugely challenging; a collapsed police state yielded to chaos. In parts of the country, religious and separatist wars flared. Jihadis, who’d been mostly kept bottled up under a dictatorship, reemerged to carry out terrorist attacks like a notorious massacre in Bali in 2002. The immediate leaders after Suharto were weak and ineffectual, particularly the aloof Megawati Sukarnoputri, daughter of Indonesia’s first president, and Abdurrahman Wahid, a mystic and cleric who led the country’s largest Muslim movement.

In 2004, another retired general came to power, Susilo Bambang Yudhoyono. While not without his flaws, he presided over a successful crackdown on terrorism, an end to the worst of the country’s ethnic and religious conflicts, and a return to economic growth that has pulled millions of Indonesians out of deep poverty. SBY, as he’s called, was term-limited out, and this year’s presidential election turned on a simple question: Are you nostalgic for Indonesia’s past, or are you interested in continuing to chart a new direction?

Hope won out over fear.

Does this mean Indonesia is on easy street? Far from it. The country is coming up on the limits of commodity-led growth, and has yet to make necessary and substantial investments in education, infrastructure and health care that could sustain its economic boom. The most corrupt forces in politics still hold major positions in parliament, and Prabowo engineered a bit of a poison pill for Jokowi before his inauguration. In September, Prabowo’s coalition in parliament rushed through legislation ending direct elections for Indonesia’s mayors, district chiefs, and governors. It was the biggest formal setback for democracy in a decade – and a change, had it happened five years ago, that almost certainly would have headed off Jokowi’s political career.

But for now, there’s an unalloyed good news story coming out of Southeast Asia, and one that bears watching.