Why London Is The World Divorce Capital 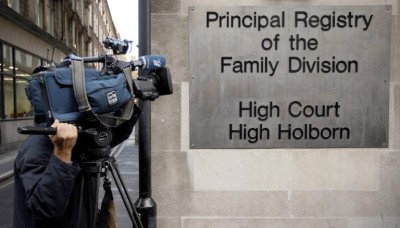 Las Vegas may be the best place for marriage but London is known as the divorce capital of the world, boosted by a ruling Friday on a Malaysian beauty queen’s bid for a big money split from her tycoon husband.

Thousands of wealthy Chinese, Russians, Americans and Europeans, many of whom work in the City of London financial district or own property in Britain, now end their marriages before an English judge.

Few are as rich as businessman Khoo Kay Peng, reputedly worth at least £400 million (500 million euros, $640 million) and Pauline Chai, tales of whose 1,000 pairs of shoes and £22,000 monthly budget for a Rolls Royce plus chauffeur has enthralled Britain’s press.

But their case has drawn fresh attention to a phenomenon which has made a handful of lawyers almost as rich as some of their clients.

“England has become very attractive for wives, in particular because awards here are considerably higher than almost anywhere in the world,” said Sandra Davis, head of the family law department at Mishcon de Reya.

“By the same count, it’s a jurisdiction that the wealth creator generally wants to avoid,” added Davis, who represented Diana, princess of Wales in her divorce from Prince Charles and US model Jerry Hall in her split from Rolling Stones singer Mick Jagger.

A judge at London’s High Court ruled Friday that it could hear the divorce between Chai and Peng after his lawyers argued it should be heard in Malaysia instead.

The former Miss Malaysia was in court for the ruling and hugged her family and lawyers in delight at the news.

“I am pleased the judge recognised my connection with this great country,” Chai said in a statement afterwards. “I am so pleased that I, my children and indeed my shoes have found a home here.”

Her legal team, led by the “Diva of Divorce” Ayesha Vardag, successfully argued that Chai had lived in England — in a £30 million mansion outside London surrounded by 1,000 acres (405 hectares) of parkland featuring a menagerie of animals — for long enough to satisfy the legal requirements.

The case could set a new record for England’s biggest divorce payout due to the length of the couple’s marriage, which lasted over 40 years.

That is currently held by late Russian oligarch Boris Berezovsky, who reportedly paid up to £220 million to his ex-wife Galina Besharova in 2011.

While no precise figures exist on how many divorces in London have an international element, lawyers say they are common. Davis said 75 percent of her clients in this field had an international link.

So what is it about England which makes it such an attractive destination for divorce?

Following a landmark case in 2000, English courts start from the assumption that marital assets should be split 50/50, favouring the less wealthy spouse.

This contrasts with many other countries and means awards in England are several times bigger than they would be elsewhere.

Another factor is that pre-nuptial agreements, signed before marriage to protect the richer spouse’s assets, are not legally binding in England.

English judges also take into account a wider range of assets when calculating each spouse’s wealth, which also appeals to the less wealthy partner.

The super-rich are not the only foreigners to divorce in the English courts.

While most cases are legitimate, it emerged last month that 179 Italian couples who had been trying to avoid lengthy procedures in their own country had divorces granted in England cancelled as they had never lived here.

Courts had been supplied with a fake English address in a scam organised by an Italian agency.

Divorce lawyers may be happy with the extra fees that foreign splits bring them but some judges seem weary of the strain which such cases are putting on the English legal system.

After reading out a three-hour judgement in Chai v Peng Friday, Judge David Bodey implored both sides “with all the strength I can muster” to reach an agreement as soon as possible.

“There is enough in the kitty that they would be hard-pressed to spend it all in their lifetimes, even if they wanted to,” he added, ruefully.