U.S. meets with Syrian Kurds in sign of shifting allegiances 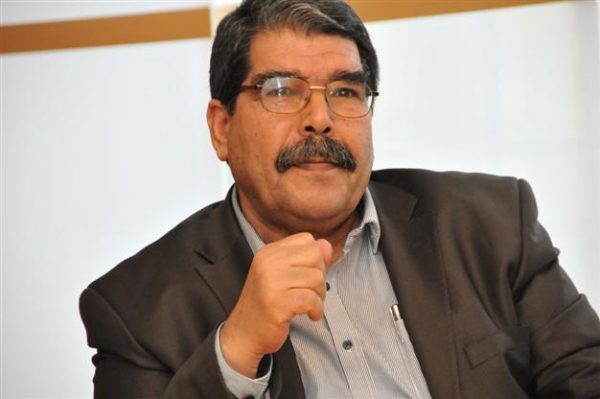 The Obama administration acknowledged Thursday that a U.S. official for the first time met with a representative of a Syrian Kurdish political party that’s closely linked to a group on the U.S. terrorism list.

State Department spokeswoman Jen Psaki said a U.S. diplomat met with a counterpart from the main Kurdish political party in Syria — the Democratic Union Party, better known by its Kurdish acronym as the PYD — to discuss the U.S.-led fight against the Islamic State group. The PYD’s militia is battling the Islamist extremists, especially near the town of Kobani on the Turkey-Syria border.

The direct talks are a sign of the shifting alliances created by the rise of the Islamic State. In Iraq, for example, the U.S. is providing air cover for Iranian-backed Shiite Muslim militias that once targeted U.S. forces. And now in Syria, it appears the U.S. is willing to work with a group that’s tied to the PKK, or Kurdistan Workers’ Party, which has waged a guerrilla war for Kurdish rights in Turkey for 30 years and which has been on the U.S. list of foreign terrorist organizations for nearly two decades. Turkey and the European Union also have blacklisted the PKK.

Psaki provided no details of the meeting beyond saying that it took place over the weekend and outside of the Middle East. Kurdish and other media reports say Charles Rivkin, the undersecretary of state for economic affairs, and PYD leader Salih Muslim met in Paris.

The new face-to-face U.S. channel to the PYD is likely to rankle Turkey, which on Monday bombed PKK locations in Turkey and has battled Kurdish civilians near Kobani protesting the international response to the Islamic State assault on the town.

At a joint briefing at the State Department, neither Psaki nor Pentagon spokesman Rear Adm. John Kirby would say whether Turkey was given a heads-up on the meeting.

The PYD’s relationship with the government of Syrian President Bashar Assad is controversial. The Kurds’ declaration of self-rule in what they call Rojava in 2012 was not opposed by the Assad government and in some places, such as Qamishli, a mainly Kurdish city in northern Syria, the PYD and Syrian intelligence are housed in buildings that are near one another.

But the PKK also has been active in battling the Islamic State in northern Iraq and Kurdish Syria and is pressing to be removed from the U.S. terrorism list. Psaki said there were no plans to remove the PKK from the list.

Syria’s Kurdistan has gotten worldwide attention lately because of the bloody tug of war unfolding there between Kurdish fighters in the town of Kobani and the encroaching Islamic State militants who have tried for months to capture it. Turkey, reluctant to bail out its Kurdish foes, is watching the fight from just across the border, a stance that so infuriates the Kurds that they’ve threatened to withdraw from peace talks with Turkey.

The United States, however, is helping the Kurdish forces at Kobani with dozens of airstrikes that apparently have allowed the Kurds to resist the Islamic State’s advance.

Idriss Nassan, the spokesman for the local administration in Kobani, called the battlefield updates “very good,” thanks in large part to the coalition air raids. He welcomed the opening of direct talks with the Americans and said that U.S. officials also were present for negotiations in the Iraqi city of Dohuk, where Iraqi Kurdish leaders are discussing a broad Syrian Kurdish alliance.