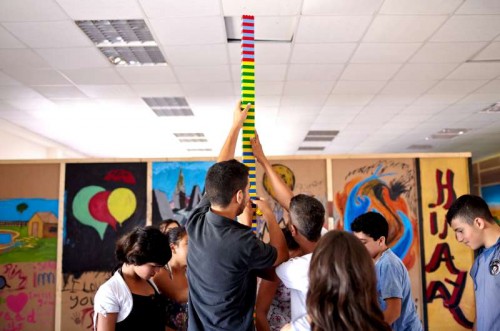 Children build a strong and steady tower with LEGO bricks during a team-building and conflict-resolution exercise at a shelter in Lebanon.
Share:
BEIRUT, Lebanon – Thirteen-year-old Mohammad* and Ramadan,* aged 12, face each other in a Beirut youth centre and take turns adding a brightly colored LEGO brick to the growing tower in front of them.

But it’s more than a game for the two boys, who are among the 520,000 Syrian children forced to flee their homes and seek shelter in Lebanon, most of them separated from family or abandoned like Mohammad, since the Syria crisis erupted in 2011. The interconnecting plastic bricks are helping the two boys to recover their lost childhood and to strengthen their confidence and communication with others.

When Mohammad fled from his home in the Syrian town of Idlib, he left his childhood behind. “I came to Lebanon in 2012 and I spent four months living in the streets alone. I learned how to take care of myself. I used to work and sleep wherever I found refuge,” the teenager told UNHCR.

While his story is disturbing, it is not uncommon. But he is fortunate to be among a group of 15 Syrian boys and girls who are learning how to work together, recover from trauma, rebuild their confidence, make friends and rediscover the joy of education and play under a programme organized by UNHCR and funded by the LEGO Foundation.

“Mohammad has changed a lot. He used to be very shy and would spend time on his own in the first few weeks. He also had some pronunciation problems. But now, it is like he is a different person; confident, collaborative, helpful and very well integrated with the other children,” said his instructor, local aid worker Kim Heshme, at the Beirut youth centre. “We believe that he has a very bright future ahead of him.”

The UNHCR-LEGO project is based on the core principles that all children, including the forcibly displaced, have the right to play and education. Local aid workers like Heshme have been trained to guide the children in activities using LEGO bricks donated by the Foundation.

For Mohammad, the play sessions have had a substantial role in helping to build his confidence and develop other essential skills. “The sessions here and the LEGO bricks, have helped me express myself a lot,” the teenager confided.

“I didn’t think I would like LEGO bricks at first, but now that I see what I can do with them, I love them. If I could spend all day playing with the LEGO bricks, I would,” he added, before following his friend Ramadan and placing another piece on the tower.

“We are trying to build a strong, steady tower,” he explained. It looked like straightforward fun, but as Kim pointed out, the exercise focused on team building and conflict resolution, helping to build the confidence of the children and their interaction with each other.

“Sometimes the children are shy. After all they have experienced, some find it hard to say something positive about a stranger, but we ask them to dig deep as we are sure they can find something they like, such as their voice, their hair, anything. Usually the ball rolls from there,” she added.

As the tower got higher and higher, so did the confidence of the children. “I was shy and could not talk to anyone, and I didn’t have the confidence to really approach strangers. But now I am stronger,” confirmed Mohammad.

In another exercise, Kim and her fellow instructors, asked the children to make a specific gesture with their hands when shown a different coloured brick. “The yellow brick means clap, with green meaning clap your hands on your thighs and red meaning hug yourself,” she instructed. The session helped to break the ice and get the children playing happily once more, something most had not done in a long time.

She added that one of the most effective games was to get the children to associate a colour with something they either love or hate. “This results in the children associating their feelings to different situations and being more prone or able to talk about them,” she revealed.

“The LEGO bricks, and the sessions we hold, are a critical way for us to reach the children, especially those who, because of the traumatic situations they may have witnessed or experienced, have a hard time speaking,” Kim stressed.