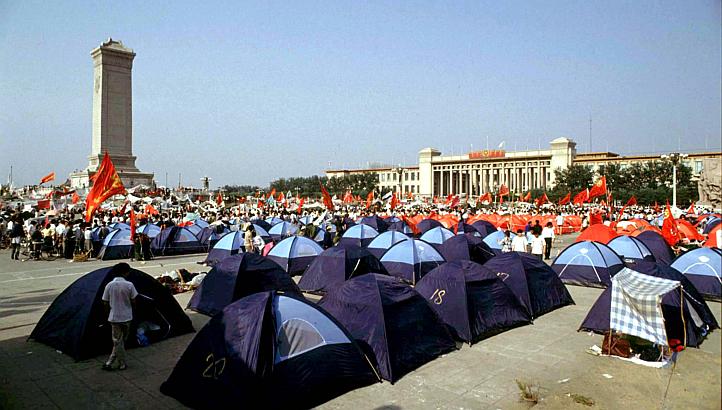 Hundreds of student activists camped overnight in major protest sites in Hong Kong as the democracy movement showed signs of regathering momentum after the government called off talks with its leaders to defuse unrest in the global financial hub.

The protests escalated since late last month, after Beijing ruled on August 31 that it would impose a tight nominating framework for an election the city’s chief executive in 2017 that would effectively shut out pro-democracy candidates from running.

The occupation movement saw a noticeable dip in support over the past week, but strong crowds of over ten thousand returned on Friday evening for a series of evening rallies in the city.

“We have tents here to show our determination that we’re prepared for a long term occupation,” said Benny Tai, one of the leaders of the movement, said emerging bleary-eyed from a tent on Saturday morning outside the government’s headquarters.

Since taking to the streets around two weeks ago, the activists have blockaded major roads around the government precinct in Admiralty, as well as the shopping districts of Central and Causeway Bay.

Leaders of the rallies on Friday urged their followers to prepare for a protracted struggle instead of expanding the protests geographically. The protests have led to some resentment among the public due to the resulting traffic jams and loss of business.

It was unclear how long Hong Kong authorities will tolerate the occupation or how the standoff might be resolved. For now, however, the police presence remains thin with authorities seemingly reluctant to risk fresh flare-ups.

Riot police had cracked down on protesters massing near the government headquarters on Sept. 28, but the authorities have taken a softer line since.

Over one hundred colorful tents were sprinkled across the eight-lane Harcourt Road highway, among scores of red and blue portable marquees serving as supply and first aid stations; stocked with water, biscuits, noodles and cereals.

“Even though it seems things are in a bottleneck now, all we can do is to stay on and continue the occupation,” said Travis Chu, a protester sitting with four friends on the road.

The ‘Occupy Central’ protests, an idea conceived over a year ago referring to the Central business district, have presented Beijing with one of its biggest political challenges since it crushed pro-democracy demonstrations in and around Tiananmen Square in the Chinese capital in 1989.

Beijing fears that calls for democracy in Hong Kong could spread to the mainland, with China already facing separatist unrest in far-flung Tibet and Xinjiang.

NO SIMPLE WAY OUT

The Communist Party leadership has dismissed the Hong Kong protests as illegal and has left Leung to find a solution. Leung has so far ignored protesters demands for full democracy and their calls for him to quit.

The leader of Hong Kong’s largest pro-Beijing political party, Tam Yiu-chung, conceded after a late meeting with Leung that while the protests should be cleared as soon as possible: “It is not a simple thing and it is not a ripe time now.”

The government’s decision on Thursday to call off the talks with students aimed at defusing tensions, came as some lawmakers demanded that anti-graft officers investigate a $6.4 million business payout to Leung, while in office.

Hong Kong Chief Secretary Carrie Lam said the talks were ditched because of the students’ persistent calls to escalate action.

China rules the former British colony through a “one country, two systems” formula which allows wide-ranging autonomy and freedoms not enjoyed on the mainland and specifies universal suffrage as an eventual goal.

In the first direct public comments by a senior Chinese leader in response to the protests, Premier Li Keqiang said Hong Kong authorities had the ability to protect the city’s economic prosperity and social stability.

“Maintaining the long-term prosperity and stability of Hong Kong is not only in China’s interests but is mostly in the interests of the people of Hong Kong,” Li said in Germany.