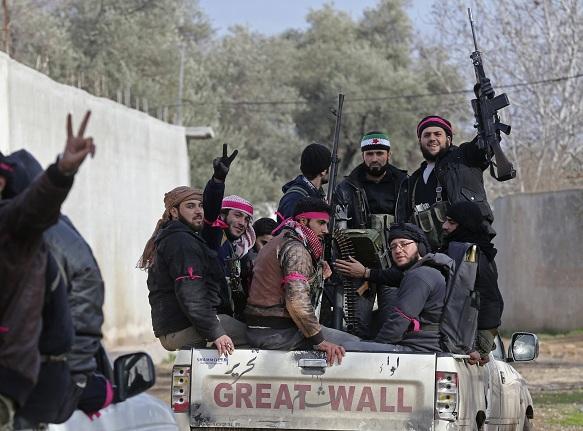 Battalions fighting with the Free Syrian Army have joined the Kurdish militia in Kobane to battle the Islamic State group, also known as ISIS. The introduction of opposition rebels into Kobane shows a shifting power dynamic in the Syrian war.

The opposition rebels are fighting under the banner of Liwa Thuwwar Raqqa, known in English as the Revolutionaries of Raqqa Brigade. The group used to fight alongside of the Al-Nusra Front — the al Qaeda offshoot in Syria — in order to protect itself from the increasingly deadly ISIS attacks. Liwa Thuwwar Raqqa broke out on its own at the beginning of this year, and officially in April, when Al-Nusra took up arms against ISIS in Raqqa, which is now occupied by ISIS.

Since then, the rebel group has joined other formations affiliated with the moderate Free Syrian Army in the north of the country. Several of its military commanders were thought to have been killed in Tal Abyad this summer.

A spokesman for one of the main opposition groups receiving U.S. funding said those battalions are now fighting under the name of “Northern Revolutionary Alliance” and have sent about 45 fighters into Kobane to battle ISIS. The group has solidified an alliance with the Kurdish People’s Protection Units (YPG), who have established a semi-autonomous enclave in the Kobane region and are at the forefront of the fight against ISIS.

Although the opposition battalions from the Raqqa region have formed an alliance with the YPG, others such as the Hazm Movement, the largest recipient of U.S. support, have resisted because, according to one member who asked to remain anonymous for security reasons, “Kobane is controlled by the PYD [a Syrian Kurdish party], and they are considered an ally of [Bashar] Assad,” the Syrian dictator.

The Facebook group called the “Syria Dignity Revolution” published a photo Monday showing Gen. Abu Ismail of Liwa Thuwwar Raqqa reading a letter calling on the U.S. to send more support so it could defeat ISIS.

“We do not understand why the U.S.-led coalition airstrikes are just bombing the empty bases of ISIS terrorists, but not Kobane, where they are launching fierce attacks,” Ismail said, according to the Facebook post.

For more than a week the U.S. has launched airstrikes on ISIS checkpoints and convoys around Kobane, according the State Department. “The airstrikes are helping Kurdish and opposition fighters as they exert pressure on ISIL’s abilities to resupply, communicate, and control their forces,” according to a statement by the State Department, which uses an alternative name for ISIS. But fighters on the ground told International Business Times that the airstrikes are not stopping ISIS from advancing on the center of Kobane.

Turkish President Recep Tayyip Erdogan said this week that coalition airstrikes alone could not defeat ISIS and ground troops were needed. But, he said, Turkey should not be expected to send troops into Syria without backup and the establishment of a no-fly zone.

Secretary of State John Kerry told reporters that the U.S. was considering the implementation of a buffer zone inside Turkey as an option to aid the fight against ISIS in Kobane. “The buffer zone … is an idea that’s out there, it’s worth examining, it’s worth looking at very, very closely,” Kerry said in a statement Wednesday.

So far Turkish troops on the border near Kobane have watched the fighting from afar and have not intervened. Turkish analysts say Erdogan will intervene in Syria only if the U.S. gives more support to the opposition to Assad, so it can take out the regime.

And for now, that leaves the Free Syrian Army battalions in Kobane — except possibly for a small contingent of Assad government troops — as the only ground troops that can help Kurdish militia fighters fend off ISIS.