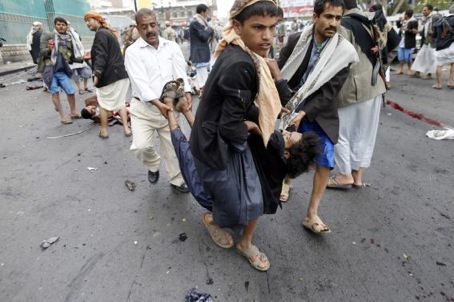 At least 47 people were killed, including four children, when a suicide bomber detonated a belt packed with explosives at a Houthi checkpoint in the centre of the capital Sanaa where Houthi supporters were preparing to hold a rally.

Body parts were scattered across Tahrir Square and pools of blood formed on the asphalt after the blast, which also wounded at least 75 people.

In eastern Yemen, where the militant group Al Qaeda in the Arabian Peninsula (AQAP) has waged repeated attacks on army installations and government facilities in recent months, at least 20 soldiers were killed in a suicide car bombing and gun attack on an army outpost, state news agency SABA reported.

The attacks occurred just hours after a showdown between the Houthis and President Abd-Rabbu Mansour forced Prime Minister-designate Ahmed Awad bin Mubarak, whose appointment on Tuesday under a power-sharing deal signed last month had angered Houthi leaders, to turn down the post.

The Houthis have emerged as Yemen’s main power brokers since their paramilitary forces seized the capital on Sept. 21, following weeks of anti-government demonstrations.

A policeman guarding a local bank near Tahrir Square in central Sanaa said a man apparently wearing a suicide belt approached the Houthi checkpoint. “He then exploded amidst the (Houthi) security and ordinary people nearby,” he told Reuters.

In Buroom, a coastal region of Hadramout province, a suicide bomber drove a car laden with explosives towards an army camp, while gunmen tried to storm the facility, a local official and witnesses said. The soldiers beat back the attackers, but SABA said 20 soldiers were killed and 13 were wounded.

There was no immediate claim of responsibility for either attack, but the incidents mirror previous bombings carried out by Al Qaeda in the Arabian Peninsula (AQAP), which has targeted state institutions, including the armed forces, and which sees members of the minority Zaydi sect of Shi’ite Islam as heretics.

U.S. ambassador to Yemen Matthew Tueller condemned the Sanaa attack and urged Yemenis to implement the power-sharing accord, which aims to resolve a decade-long Houthi insurgency and pull the country out of a crisis precipitated by the 2011 uprising that forced veteran President Ali Abdullah Saleh to step down.

A southern secessionist movement and the AQAP onslaught on security forces has already stretched the resources of the impoverished country of 25 million and alarmed neighbouring Saudi Arabia, the world’s top oil exporter, and other conservative Gulf Arab states.

“The Yemeni people have lived with senseless violence for far too long and the recent increase in hostilities against innocent civilians only undermines the progress Yemen has made since the 2011 revolution,” the U.S. embassy said in a statement posted on its website. “Yemen’s challenges are political and therefore must be resolved through political solutions.”

Western and Gulf Arab countries are worried that instability in Yemen could strengthen al Qaeda and have supported a U.N.-backed political transition since 2012 led by Hadi meant to shepherd the country to stability after decades of autocracy.

A new Yemeni government is due to be appointed under a power-sharing accord signed last month aimed at bringing the Houthis into government. Once a new administration is nominated the Houthis are meant to withdraw their forces from the city, allowing the army and police to resume their duties.

The Houthis on Wednesday rejected Hadi’s nomination of bin Mubarak as prime minister, and bin Mubarak announced early on Thursday he had agreed not to take up the position.

Houthi followers had been preparing to demonstrate in Tahrir Square on Thursday to voice opposition to the nomination of bin Mubarak, previously the head of Hadi’s office, on the grounds that his selection had been imposed by Washington. The United States has denied the allegation.

The Houthis pushed ahead with the protest despite the attack, and thousands of supporters, some armed, converged on the square chanting slogans against the government and corruption.

“This terrorist attack would not deter us from holding this demonstration,” a local organiser told Reuters.

The Houthis said they had foiled another attack by two cars on the square earlier in the morning, destroying one vehicle, while attackers in a second car managed to escape.

On Wednesday evening Houthi leader Abdulmalik al-Houthi called for mass protests against “foreign interference” he said was behind the appointment of bin Mubarak.

“I assert that together with these marches tomorrow, God willing there will be important steps that will contribute to correcting this mistake, which is an unacceptable mistake,” Houthi said.

SABA said that Hadi accepted bin Mubarak’s decision to turn down the appointment and resumed consultations to agree on a new prime minister.