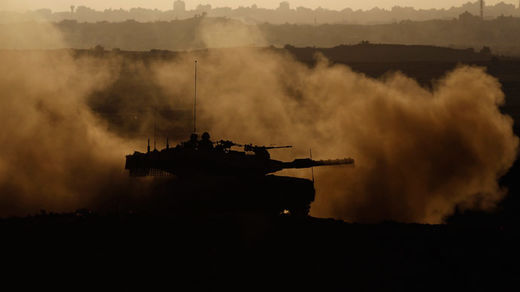 The Israeli Army fired artillery shells into Lebanon after two IDF troops were injured in a blast on the border between the two states, for which Hezbollah claimed responsibility
Share:

The Israeli army has blamed the Lebanese government for a bomb blast that targeted two Israeli soldiers on border with Lebanon on Tuesday.

“The Lebanese government & Hezbollah are directly responsible for this blatant breach of Israel’s sovereignty,” army spokesman Peter Lerner wrote on his Twitter account.

The Israeli army said earlier Tuesday that two soldiers were slightly injured in a blast near border with Lebanon, which was later claimed by Shiite Lebanese group Hezbollah.

There was no comment from the Lebanese prime minister on the attack, but Minister of State for Administrative Development, Nabil De Freij, a key member of the March 14 alliance criticized the Iranian backed Hezbollah militant group said Wednesday :

“Hezbollah Wanted through the process yesterday to say that it is choosing the time and place in the confrontation with Israel, as if they did not learn anything from the July 2006 war .”

“We’ve proven that we react with force to any attempt to harm us, whether it’s in the south or another front,” Israeli Prime Minister Benjamin Netanyahu wrote on Twitter.