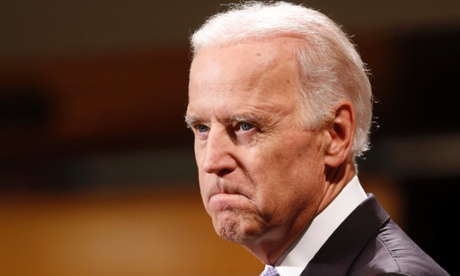 Vice President Biden apologized on Sunday for the second time in two days, in this instance to the United Arab Emirates, for comments he made suggesting that the United States’ Arab allies armed and funded terrorists in Syria.

The furor over the comments, made during a foreign policy address at Harvard University last week, have exposed deep rifts between the United States and its regional allies over who is to blame for the rise of the Islamic State and how to go about confronting it, underscoring the fragility of the coalition formed to fight the extremist group.

The White House said Biden telephoned Prince Mohammed bin Zayed, the crown prince of Abu Dhabi and the most prominent Emirate leader, to say that the vice president did not intend to imply that the UAE supported terrorists.
The call followed an angry statement from the UAE’s Foreign Ministry earlier in the day expressing “astonishment” at Biden’s remarks and demanding a “formal clarification.”

Biden had described the United States’ allies as the “biggest problem” in the fight against terrorism, then went on to name Turkey, Saudi Arabia, Qatar and the United Arab Emirates.

Turkey was the first to complain, about a different remark made on the same occasion in which Biden claimed that Turkish President Recep Tayyep Erdogan had told him that Turkey was wrong to let foreign fighters cross the Turkish border into Syria.

Erdogan responded with a furious outburst, calling his relationship with Biden “history,” demanding an apology and denying that he had either made the comment to Biden or that Turkey had allowed foreign fighters to cross its borders.

Biden called Erdogan on Saturday to apologize, and the White House issued a separate statement in which the vice president said that Biden did not intend to imply that any of those allies had “intentionally” facilitated terrorists.

The United Arab Emirates is a key member of the international coalition formed to confront the Islamic State, and made headlines last week when it dispatched a female pilot to bomb Iraq. A statement from the UAE’s Foreign Ministry said Biden had overlooked the UAE’s “role in confronting extremism and terrorism.”

The UAE’s contribution, the statement added pointedly, “comes as part of a more comprehensive political stand against this plague,” hinting at one of the biggest points of contention between the United States and its regional allies over who is to blame for the rise of the Islamic State.

As Biden’s frank comments revealed, many in the Obama administration hold the Gulf Arab states and Turkey largely responsible for fueling the extremist forces that have eclipsed the more moderate, Western-backed rebels.

“They poured hundreds of millions of dollars and tens of thousands of weapons into anyone who would fight against Assad,” Biden said during the address at Harvard, referring to Syrian President Bashar al-Assad. “Except that the people who were being supplied were [Jabhat] al-Nusra and al-Qaeda,” he added, naming Syria’s al-Qaeda affiliate.

The United States’ regional allies, however, fault the Obama administration for not fulfilling promises of support to the more moderate rebels or pushing more aggressively for Assad’s ouster, thereby enabling extremists to gain the upper hand. They want the fight against terrorism to include a broader settlement that would include regime change in Damascus.

Turkey has not decided whether it will offer military support to the coalition, and the furor could jeopardize intense U.S. efforts to persuade it to do so. Turkey has publicly stated that it does not think a war against the Islamic State that does not also include a plan to remove Assad will work.

Saudi Arabia and Qatar have not issued a response to the Biden comments.