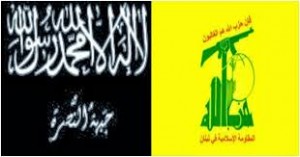 The border between Lebanon and Syria was the scene of direct and unprecedented clash between the Iranian backed Shiite Hezbollah militants and al Qaeda linked Jabhat al-Nusra jihadists . This new and serious development is likely to have serious repercussions in the coming weeks. There are several theories about how this situation came to pass, according to a report by Al Momnitor.

This development comes a week after the regular Syrian army forces redeployed in al-Nabk, near ​​the Lebanese border. Official Lebanese sources confirmed the event. On first glance, the redeployment would appear to be unremarkable given the movement of Syrian army units since the beginning of the civil war about 3 1/2 years ago, but upon closer inspection, the seriousness of the maneuver becomes apparent, according to the report.

Al-Nabk area stretches more than 45 kilometers along the border region. It starts to the west at the Jabal Akrum area of Akkar, north of Lebanon, and extends to ​​Arsal, in the Bekaa to the east, along a strip of rugged mountainous land where the Lebanese state — including administrative authorities as well as security forces — has not had a presence for decades. What is more important about this strip from which the Syrian army withdrew is that it is now almost completely controlled by the jihadists of Jabhat al-Nusra. In addition, the adjacent Lebanese territory is inhabited by an overwhelmingly Shiite population, which points to Hezbollah having a dominant presence there.

As a result of the new development  ,  the Shiite Hezbollah and Sunni Jabhat al-Nusra today stand face to face along a significant length of the Lebanese-Syrian border in the absence of a restrictive or deterrent force in the form of the Lebanese or Syrian state. Remarkably, this development resulted from a sudden redeployment by the Syrian army.

The situation is similar to the east in the central Bekaa, where the regular Syrian army is still deployed about 30 kilometers from the Damascus. In short, the Syrian army remains deployed in areas adjacent to Sunni regions, but has strategically withdrawn from Lebanese Shiite villages, paving the way for Jabhat al-Nusra to fill the vacuum, putting paving the way for direct confrontation with Hezbollah militants.

The new situation triggered new accusations in Beirut. Supporters of the Syrian opposition were quick to accuse the Syrian regime of having hatched a “conspiracy” to further fuel tensions over Syria. They believe the army’s movement was an attempt by Damascus regime to illustrate that its collapse would cause mayhem in the region. Moreover, the government of Bashar al-Assad regime is trying, allegedly, to lure its Lebanese Shiite ally, Hezbollah, into fully engaging in the Syrian crisis in an attempt to perhaps have Iran and maybe Iraq follow suit. Thus, the Syrian conflict would be transformed into a regional issue, the resolution of which would necessitate more than bilateral negotiations between the regime and the opposition.

Acoording to the report , a confrontation between Jabhat al-Nusra and Hezbollah has strategic value in the ongoing conflict. Jabhat al-Nusra could pressure Damascus and Zabadani through the Lebanese region of Arsal. Moreover, the Sunni jihadists could also put military pressure on the Syrian Alawite and Christian coast in the west. Such dangerous developments on the battlefield would exacerbate the crisis in Lebanon and in Syria and worsen relations between the two countries.

The security sources also said that at least 20 other Hezbollah fighters were wounded in the clashes .