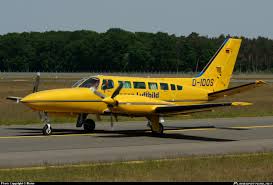 The Ministry of Energy announced that the first plane, aimed at conducting aerial surveys of offshore oil and gas fields, arrived in Lebanon.

The plane, a Cessna 404 which arrived at Rafik Hariri International Airport in Beirut will be followed by another plane .

The planes are part of an agreement between GEOS Solutions and the Ministry of Energy that was signed last January according to Lebanese media reports.