US is overtaking Saudi Arabia as world’s largest petroleum producer

The US is overtaking Saudi Arabia to become the world’s largest producer of liquid petroleum, in a sign of how its booming oil production has reshaped the energy sector.

US production of oil and related liquids such as ethane and propane was neck-and-neck with Saudi Arabia in June and again in August at about 11.5m barrels a day, according to the International Energy Agency, the watchdog backed by rich countries.

With US production continuing to boom, its output is set to exceed Saudi Arabia’s this month or next for the first time since 1991.
Riyadh has stressed that the rise of the US should not detract from its own critical role in oil markets. It says it has the ability to increase its output by 2.5m b/d if needed to balance supply and demand.

However, even Saudi officials do not deny that the rise of the US to become the world’s largest petroleum producer – with an even greater lead if its biofuel output of about 1m b/d is included – has played a vital role in stabilising markets.
Global crude prices have fallen in the past two years, in spite of the turmoil in Syria and Iraq, fighting in Libya and Russia’s conflict with Ukraine.

Over that period, the growth in US production of more than 3.5m b/d has almost equalled the entire increase in world oil supplies.

The US industry has been transformed by the shale revolution, with advances in the techniques of hydraulic fracturing and horizontal drilling enabling the exploitation of oilfields, particularly in Texas and North Dakota, that were long considered uncommercial.

Crude prices that are high by the standards of a decade or more ago have made it profitable to use those techniques to extract oil.

Rising oil and gas production has caused the US trade deficit in energy to shrink, and prompted a wave of investment in petrochemicals and other related industries.

It is also having an impact on global security. Imports are expected to provide just 21 per cent of US liquid fuel consumption next year, down from 60 per cent in 2005. 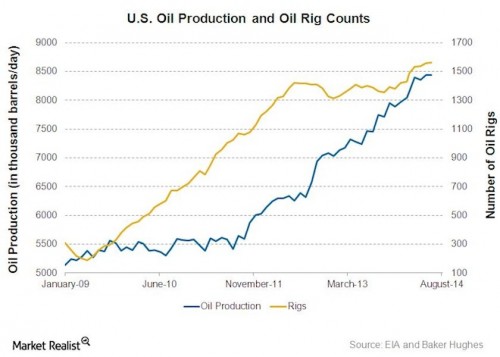 Although that decreased import dependence has not led the US to disengage from the Middle East, it has encouraged calls for a reduced military commitment to the region.

China’s emergence as a larger oil importer than the US has increased its interest in the Middle East, reflected in the first visit by a Chinese warship to Iran this week.

US crude oil production in August was still lower than either Saudi Arabia’s, at about 9.7m b/d, or Russia’s at 10.1m b/d. The overall US leadership in petroleum is accounted for by its higher production of natural gas liquids such as ethane and propane, which have a lower energy content and are often used as feedstocks for the petrochemical industry rather than for fuel.

Still, on current trends the US could catch up with Saudi Arabia and Russia on crude production alone by the end of the decade.