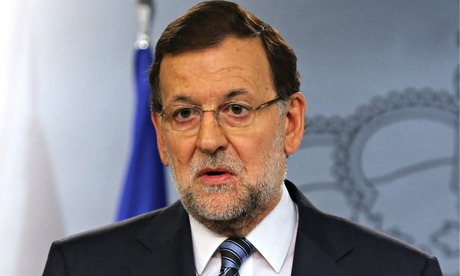 Mariano Rajoy, the Spanish prime minister
Share:
The Spanish government has asked the country’s constitutional court to block Catalonia’s November referendum, setting in motion a series of actions that will make this week crucial for the push for independence in the north-eastern region.

In his first remarks since the Catalan leader, Artur Mas, formally called the referendum on Saturday, the Spanish prime minister, Mariano Rajoy, said the Madrid government believed the vote was “anti-democratic” and the constitution prevented any region from unilaterally making decisions that affected all Spaniards.

“We can’t allow the will of a few to deprive everyone else of their rights,” he said.

The legal challenge to the Catalan referendum and to a regional law that gave Mas the power to call the vote had been widely expected. Shortly after Rajoy’s announcement, the court said it would hold a special meeting on Monday evening.

As soon as the court accepts the case, both the referendum and the regional law are likely to be suspended for up to five months, meaning all campaigning and preparation for the vote would have to be halted.

Until that moment, however, the legal limbo has allowed the campaign to get under way. On Sunday the Catalan government launched the referendum website and a video urging citizens to vote. Catalonia’s vice-president, Joana Ortega, standing in front of half a dozen ballot boxes, said authorities were preparing more than 10,000 ballot boxes and six million ballots.

Rajoy repeatedly called for dialogue between Madrid and Barcelona, saying there was still time to “right the ship and overcome the sterile dialectic of confrontation”. Before any negotiation, he said, Barcelona must abandon its plans for a vote on independence.

“When one party acts outside the legal framework and against the interests of the rest of us, it cannot be the obligation of the government to find an intermediate meeting point,” he said.

Francesc Homs, the Catalan government spokesperson, insisted the sovereignty process would continue regardless of Madrid’s position. Speaking to the Catalan broadcaster TV3 before Rajoy’s announcement, he called the court challenge “one of the largest errors in Spanish democracy”.

Polls show a majority of Catalans would like a vote to be held. “They [Madrid] think they’re killing it, but I’m convinced that what this does is reinforce the movement in Catalonia,” Homs said.

If the constitutional court did suspend the referendum, he said, the Catalan government would find a way to allow the vote to go forward. “We won’t just stand there with our arms crossed as if the game is over.”