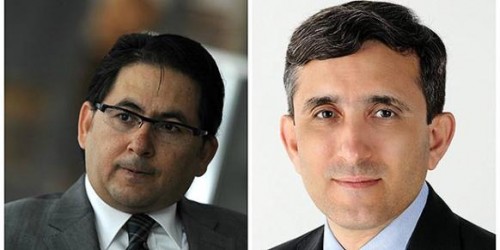 Following an attack by President Recep Tayyip Erdoğan’s bodyguards on Turkish journalists in New York on Thursday, domestic and international media organizations have issued statements expressing their dismay at the extension of government pressure on even the Turkish press abroad.

On Saturday, French-based Reporters without Borders (RSF) issued a report on its website raising concerns about media freedoms in Turkey. It provided a detailed account of the attack on Adem Yavuz Arslan, the Washington representative of Bugün daily, and Ali Aslan, the Washington correspondent for the Zaman daily. It mentioned how Erdoğan’s team attacked the two journalists because of their newspapers’ critical stance against the president. RSF President Lucie Morillon condemned the attack, describing it as unacceptable and, according to RSF, the attack on the journalists outside of Turkey “shows how Turkish authorities are now taking a much tougher line with the media.” Morillon urged the Turkish authorities to punish those responsible for this violence, which obstructed the work of the reporters.

Last week, RSF also wrote an open letter to Erdoğan voicing alarm at the state of freedom of expression in Turkey. The organization reiterated in the letter findings from its report, which ranked Turkey 154th out of 180 countries on the RSF press freedom index.

The president of the National Press Club (NPC) in Washington, Myron Belkind, also expressed concern regarding the attack on the two journalists, which occurred when President Erdoğan was in a meeting with US Vice President Joe Biden on Thursday at New York’s Peninsula Hotel. According to Aslan and Arslan, the altercation began after Ali Erdoğan, the Turkish president’s nephew and security team member, attacked one of the journalists. It has been reported that Erdoğan’s nephew holds diplomatic immunity because he is employed as an advisor to Erdoğan, although he serves as his bodyguard.

Belkind, a journalist with almost half a century of experience and president of an organization with over 3,500 journalists across the US, stressed the importance of journalists having the freedom to accurately do their jobs.

The critical statements came during an ongoing visit of the world’s leading press freedom advocacy groups to Turkey. The New York Times reported on Saturday that an international delegation from the Committee to Protect Journalists (CPJ) and the International Press Institute (IPI), based in New York and Vienna, respectively, are expected to visit Turkish officials, including the president, regarding the “harassment and prosecution of foreign and domestic journalists whose reporting is deemed hostile or unfair by the government.”

The CPJ-IPI delegation is also expected to visit the Zaman Media Group, which includes Today’s Zaman and has been one of the main and direct targets of an almost year-long smear campaign led by Erdoğan. The campaign intensified after the eruption of a corruption scandal in December. According to The New York Times, Erdoğan promised meet with the press advocacy delegation while it is in Turkey.

The New York Times’ story also mention how Erdoğan had even targeted the paper itself. He severely criticized the US daily for its reporting on alleged Turkish connections to the Islamic State of Iraq and the Levant (ISIL), and accused the paper of “seeking to create an impression that he was a supporter of ISIL.”

Media advocacy groups in Turkey have continued voicing their concerns for press freedom, with the president of the Media Ethics Council (MEK), Halit Esendir, making a statement protesting the attack on Aslan and Arslan. He described the verbal attack by Erdoğan’s advisor, Mustafa Varank, and the physical attack by the president’s nephew as totally “unacceptable” and directed attention to the antidemocratic decisions made by Erdoğan that discriminate against certain media groups. Even before taking the post of president, Erdoğan blocked critical journalists from his press meetings and party congresses. He liked the current state of events to the restrictions on the media during the age of military supremacy in Turkey, and said the government’s exclusion of certain media groups in Turkey by using its own form of accreditation is not compatible with press freedom.

The attack by the bodyguards of Erdoğan were not just on Aslan and Arslan. A group of Turks living in the US protested Erdoğan in front of the hotel on Friday, but the president’s bodyguards, led by his nephew, attempted to intervene in the protest. When the Turkish bodyguards grabbed one of the protesters, the American police became involved and a clash took place. Some were heard saying in Turkish, “This is not Turkey,” in protest of their treatment by Erdoğan’s bodyguards. Ali Erdoğan reportedly swore at the protesters from across the street.

When asked about the incident, Belkind emphasized the absolute right to protest on the streets of New York or anywhere else in the United States.

On Friday, during a local journalists seminar held by the Turkish Journalists’ Association (TGC) in Sivas province, TGC President Tuncay Olcayto expressed concern for the discrimination and serious political pressure being put on journalists. He said journalists are being used as tools for political purposes.