Analysis: Who brought the Arabs to this nadir? 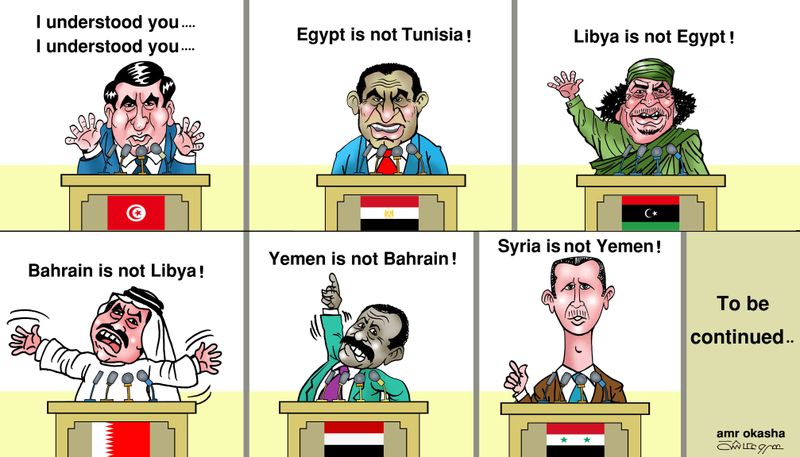 In recent weeks and months I tried in this space to critique an Arab political culture that continues to reproduce the values of patriarchy, myth making, conspiracy theories, sectarianism, autocracy and a political/cultural discourse that denies human agency and tolerates the persistence of the old order. The article in which I said that the ailing Arab body politic had created the ISIS cancer, and a subsequent article published in Politico Magazine generated a huge response and sparked debates on Twitter and the blogosphere.

The overwhelming response was positive, even though my analysis of Arab reality was bleak and my prognosis of the immediate future was negative. Yet, these articles were not a call for despair, far from it; they are a cris de Coeur for Arabs, particularly intellectuals, activists and opinion makers, to first recognize that they are in the main responsible for their tragic conditions, that they have to own their problems before they rely on their human agency to make the painful decisions needed to transcend their predicament. These articles should be viewed through the motto of the Italian Marxian philosopher Antonio Gramsci: “Pessimism of the spirit; optimism of the will.” Pessimism of the will, means that you see and analyze the world as it is not as you wish it to be, but for this pessimism not to be fatal, it should be underpinned by the optimism of the will, to face challenges, and overcome adversity by relying on human agency .

A legacy of autocracy and fear

The negative reaction to the two controversial articles ranged from the lunatic and racist fringe which refuses to recognize the immense cultural and civilizational contributions of Arabs and Muslims, to the juvenile left that sees Arab self-criticism as self-flagellation because it does not blame the U.S. or Israel for ALL Arab ills. In my articles I said that no one paradigm could explain the state disintegration, social fragmentation and the civil wars ranging in a number of Arab societies, nor one can reduce the failure of various political ideologies that dominated the Arab world in the last century to one overarching reason be it economic, political, social or cultural. That was my way of criticizing the tendency of many scholars to always look for one paradigm, or a certain model, or one encompassing theory to explain very complex problems that cannot be reduced to one neat interpretation.

Those majority of Arab societies currently going through violent convulsions or wrenching “transitions” : Syria, Iraq, Libya, Yemen, Egypt, Bahrain and Lebanon have reached their nadir because of multiplicity of reasons ranging from repressive autocracy, alliances between predatory political elites, corrupt mercantile classes, and economic monopolies, reactionary interpretations of Islam, as reflected in the visions and practices of Islamists movements (in varying degrees) chauvinistic or hyper nationalisms and yes a cultural inheritance, rooted in religious conservatism that produces values of ignorance, fatalism, dependency and fear of authority. Some Arab countries, even decades after their independence are still struggling with their identities, particularly heterogeneous countries like Iraq and Algeria. Even, the mostly homogenous Egypt was struggling with issues of identity and cultural and political orientation, particularly during the brief rule of the Muslim Brotherhood. These cultural factors are usually not always given their weight by political scientist and historians. Of course, western military interventions, from the British-French-Israeli attack on Egypt in 1956 to the debilitating Arab-Israeli wars, to the first Gulf war in 1991, to the disastrous U.S. invasion of Iraq in 2003 have contributed significantly to the current impasse. 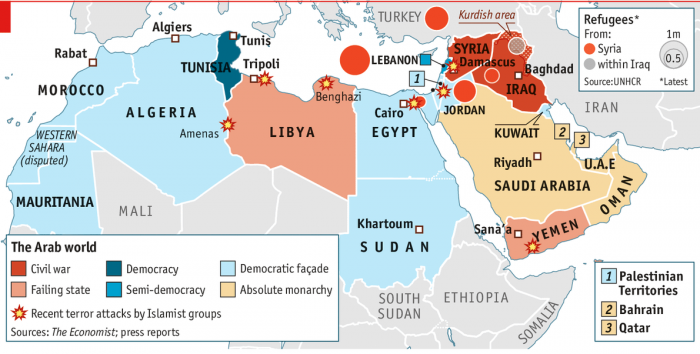 The Arabs and the rest

But the Arabs were not the only victims of colonialism, and with the exception of Algeria which gained its independence from France after a savage war, colonialism in the Arab world was not as devastating as it was in Africa. Egypt and India were colonized by the same power and gained sovereignty after the Second World War. And both are plagued with demographic overweight. But for most of its independent life Egypt was ruled by a strong military leader, while India maintained its democratic rule – strained at times- even when its military achieved victories in wars with Pakistan and it managed difficult political transitions after the assassinations of some of its elected leaders. India, despite its economic and social inequalities, produces science and knowledge in its universities and in Bangalore, its high technology capital.

There are no such universities in Egypt. In 1960 the GDP per capita for South Korea and Egypt were almost equal, $155 and $149 respectively and their populations were practically identical, 25 million and 27 million respectively. By 2012 the gap is frightening. The GDP per capita in South Korea has reached $16,684 with a population of 50 million. In comparison, Egypt’s GDP per capita has grown only to $1,976, and its population has tripled to 82 million. What went wrong in Egypt and what went right in South Korea is a tale of political will and good and bad governance. South Korea invested heavily in education and in its corporations and revolutionized industrial productivity by empowering women and incorporating them in the labor force. By contrast Egypt did not improve the quality of its educational system, and invested heavily in non-competitive industries.

Not all autocrats are alike

Arab states have had more than their share of military dictators who enforced their absolute authority and decimated their societies and ruined their economies even in those countries that enjoyed considerable hydrocarbon deposits such as Iraq, Libya and Algeria. They ruled in the name of Arab Nationalism and they manipulated religious authorities and symbols (Saddam Hussein was the most outrageous offender in this regard), while exploiting sectarian, ethnic and tribal fissures. 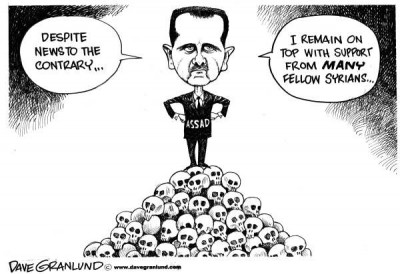 Others such as the Assads in Syria and Ali Abdallah Saleh in Yemen adopted the same ways. The military rulers and autocrats of Asia, such as Park Chung-hee of South Korea and Lee Kuan Yew, of Singapore, who are credited with putting their countries on a trajectory of industrialization and wealth, look very benign when compared with Arab despots like Hussein whose wars and invasions caused the death of at least half a million people, or the Assads, who are responsible for the death of more than a quarter of a million people. Even the awful depredations of Augusto Pinochet, the dictator of Chile, pale in comparison with the bloody deeds of his Arab contemporaries. At least Pinochet did not wreck the Chilean economy and some credit him with turning Chile into a major economic power in Latin America.

There is one benign Arab autocrat whose legacy in part explains why Tunisia, of all the countries that went through an uprising is on the path of good governance. Tunisia’s president Habib Bourguiba, abolished polygamy and enacted a series of laws and secular reforms in 1956, giving women the right to vote and access to higher education, the right to file for divorce, and access to employment opportunities. Modern Tunisia has maintained a secular tradition and a polity more tolerant than its neighbors. Bourguiba benefited from Tunisia’s legacy of reform which goes back to the reign of the reformer Khayr al-Din Pasha al-Tunisi in the 1870’s. Tunisia was a trail-blazer when it became the first Arab country to outlaw slavery in 1846, one year before Sweden and, astonishingly 17 years before the United States. This legacy of secularism and empowering women is one of the reasons why Islamists were kept at bay and prevented from monopolizing political power after the overthrow of President Bin Ali.

Self-criticism after defeats and disasters

After the 1967 defeat, Beirut became the center of a vibrant no holds barred debate among Arab intellectuals about the meanings and the reasons for the unimaginable disaster that befell the Arab world at the hands of Israel. Many scholars, from different political and ideological orientations published books and articles and held open and blunt discussions. The famed Syrian Poet Adonis, published his pioneering Journal Mawaqif which became the medium for soul searching, and critical introspection and analysis about the factors, assumptions, values and practices that led to the calamity. One seminal book was Self Criticism After the Defeat (1968) by the renounced Syrian philosopher Sadik al-Azm. The book was a milestone in modern Arab intellectual history and Azm did not spare any political taboos, when he deconstructed the many glaring failures of Arab society, politics and culture. 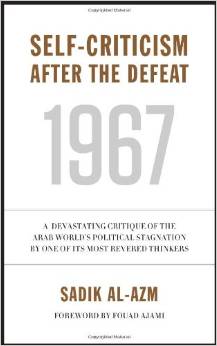 It became clear that the defeat was not only military, but political and cultural. The defeat was symptomatic of the failure of Arab regimes in creating viable modern, democratic polities free of outmoded political and religious dogmas. A year later, Azm published another devastating tome Critique of Religious Thought which landed him briefly in jail. The book contained a merciless critique of reactionary religious thoughts and how Arab states used religious authorities to manipulate their peoples. The Lebanese government failed in its attempt to charge Al-Azm of inciting sectarianism or banning the book.

In the following years, with the devastation of the civil wars of Lebanon, the Syrian and Israeli occupations, and the rise of sectarianism, Beirut began to lose its liberalism and openness. After Khomeini’s fatwa against Salman Rushdi’s book The Satanic Verses , Al-Azm published another critical book titled The Mentality of Prohibition. But this time, the book was sold clandestinely in Beirut.

During the heyday of Arab Nationalism, many Arab intellectuals entered into a Faustian deal with the custodians of power in their world. They accepted a deal in which they will not agitate for freedom and democracy, until the Nationalist fought their supposedly historic battles with the forces of Arab reaction, Israeli usurpation and Western imperialism. All the battles were lost, and with them the hopes of freedom and democracy.

Today, the world of millions of Arabs is collapsing; whole societies are consumed by the flames of sectarianism, political fragmentation and economic disenfranchisement. The indefatigable Sadik Al-Azm is still at it, always probing and always deconstructing. He is now part of a smaller minority of such intellectuals, living and writing and publishing mostly in the west. And unless Arab intellectuals and activists engage in a no holds barred debates similar to what happened in Beirut after 1967, in which all their political, cultural and religious inheritance is put to critical inquiry, the Arabs will continue to roam endlessly in a political wilderness of their own making. But if you are looking now for a vibrant debate, about what ails the Arab world today, and if you are searching for a liberal open Arab city for Intellectuals to engage in critical introspection, you will be searching in vain.