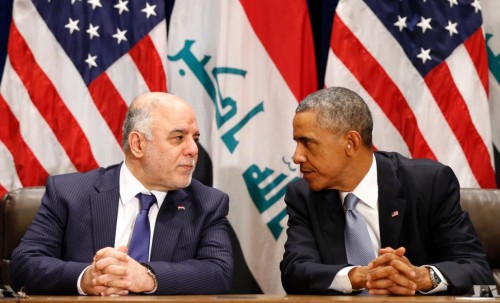 The Iraqi prime minister was accused of “crying wolf” Thursday after he suddenly announced that the Islamic State was plotting to launch attacks on subways in the U.S. and in Paris.

Haider al-Abadi dropped that bombshell during a brief meeting with reporters at the United Nations, citing “accurate reports” from back home in Baghdad.

But as local officials scrambled to reassure the public that they were prepared for any threat, the National Security Council poured cold water on Abadi’s announcement and U.S. Rep. Pete King (R-Long Island) threw diplomacy aside and blasted the Iraqi leader.

“If you cry wolf,” King said, people will stop listening to real threats “and you will have more casualties.”

King, who chairs the  US House Subcommittee on Counterterrorism and Intelligence, said “there is absolutely no evidence” that at an ISIS attack on New York City was imminent.

“People should not take it seriously until they are told by the NYPD, by the FBI or by Homeland Security that there is something there,” he said. “And I don’t expect anything to be there.”

Police Commissioner Bill Bratton agreed that the ISIS threat has been overblown and said the NYPD was waiting for a “clarification of the Iraqi prime minister’s remarks.”

Abadi made the claim a day after he met with President Obama and Arab leaders at the U.N. to discuss the ongoing bombing campaign against ISIS, a brutal Sunni Muslim militant group that has beheaded U.S. reporters and gobbled up huge swaths of Iraqi and Syrian territory.

“We would certainly take seriously any information they’re learning as they have ISIL operatives detained,” he said.

Abadi, who has been prime minister for just over a month, told reporters the plotters were ISIS fighters from the U.S. and France who are currently in Iraq.

“Today, while I’m here, I’m receiving accurate reports from Baghdad, where there was an arrest of a few elements, and there are networks planning from inside Iraq” to attack “in the metros of Paris and the U.S.,” he said.

“Yes,” Abadi answered when asked if the ISIS attacks were imminent.

“No,” he replied when asked if they had been thwarted.

Abadi divulged no other details about the alleged scheme to cause mayhem in the two countries that have been leading the charge against the murderous ISIS militants.

Minutes later, John Miller, the NYPD’s anti-terrorism czar, announced the department was on the case.

“We are aware of the Iraqi prime minister’s statements and we are in close contact with the FBI and other federal partners as we assess this particular threat stream,” he said in a statement.

“New York City normally operates at a heightened level of security and we adjust that posture daily based on our evaluation of information as we receive it.”

“The Mayor’s office is aware of the reports and the city takes any threat seriously,” spokesman Phil Walzak said. “We are in close consultation with the NYPD and other law enforcement agencies.”

“Over the past few weeks we have already begun to increase security at mass transit sites,” he said.

“We have not confirmed such a plot, and would have to review any information from our Iraqi partners before making further determinations,” Hayden said. “We take any threat seriously and always work to corroborate information we receive from our partners. We’re obviously very focused on the issue of foreign fighters, as you saw evidenced yesterday at the Security Council session the President chaired.”

And an NYPD source told The Daily News the department was tipped off three weeks ago about a vague threat against city subways the suburban rail systems that never materialized.

Abadi’s warning, the source added, could be a repeat of what the NYPD was told earlier.

While Abadi did not specify which U.S. mass transit system was in the crosshairs of ISIS, the New York City subway is the nation’s largest and the likeliest target for a terror attack.

Straphangers did not appear to be rattled.

“Anything is possible, but I’m not afraid,” said Nyoshe Fogah, 30, a nursing assistant from the Bronx waiting for the A train at 145 St. “Crazy things happen all over, especially in New York. You’ve got to get on with your life.”