Ultra-Orthodox Jews cause chaos on flight to Israel 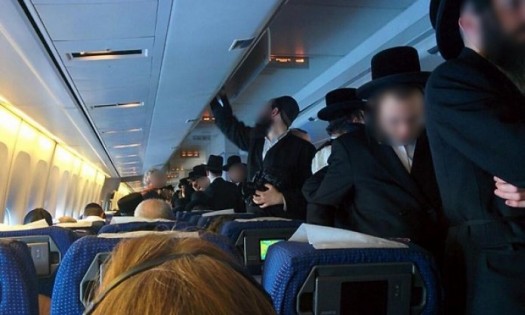 An El-Al flight from New York to Tel Aviv was turned into an “11-hour nightmare” after hundreds of ultra-Orthodox Jewish passengers refused to sit next to women.

According to those on board the flight descended into chaos because of their demands.

The flight was full with Israelis, secular, orthodox and ultra-Orthodox Jews – known as Haredim – flying home to celebrate Rosh Hashanah.

Even though the passengers had been pre-assigned seats before boarding, the ultra-Orthodox Jews refused to accept the arrangements because their beliefs required that men and women were segregated.

As the aircraft prepared to take off, the haredi men, distinguishable by their black suits and in many cases wide-brimmed black hats, stood in the aisles rather than sit down, delaying the departure.

Others on board told ynetnews.com of their frustration, which was shared by the pilot who pleaded for everyone to sit down.

“People stood in the aisles and refused to go forward,” said Amit Ben-Natan, a passenger on the flight

“Although everyone had tickets with seat numbers that they purchased in advance, they asked us to trade seats with them, and even offered to pay money, since they cannot sit next to a woman.

“It was obvious that the plane won’t take off as long as they keep standing in the aisles.”

The flight took off after the haredim agreed to take their places to permit departure, before the chaos resumed once the seat belt signs were switched off.

One passenger described the entire experience as an 11-hour nightmare.

“El Al does everything it can to give its passengers the best possible service year-round,” an airline spokesman said.

“These days bring with them a peak in air traffic to Israel, and our crews on the ground and in the air are doing the best they can to address the needs and requests of all our travellers while trying not to fall behind schedule.”