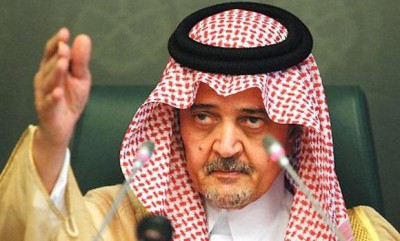 Saudi Foreign Minister Prince Saud al-Faisal, whose country is a key member of the U.S.-led campaign against Islamic State militants in Syria, said his country was ready to help Lebanon if it asked for assistance in combating Terrorists.

In remarks published by An Nahar newspaper on Thursday, the Saudi FM said: “We have helped Lebanon to buy weapons through a $1 billion donation.”

Asked if Saudi Arabia would help Lebanon confront the wave of terrorism that it is facing, he said: “We would do so if Lebanon asks for our assistance.”

He stated the Lebanese officials have appreciated the Saudi $1 billion grant.

“We hope it would have a bigger impact in protecting Lebanon’s security,” he added.

The Saudi FM said Wednesday that the U.S.-led campaign against the extremists “should start by putting an end to the causes of this terrorism.”

“The regime in Syria is the root cause behind the presence of ISIS,” he said, adding it had created a security vacuum which had led to the group’s rise.

“Our support for the moderate opposition should not be limited to the military sphere… but should also include practical steps to weaken the Syrian regime by an economic blockade,” the prince added
He also called on those responsible for crimes to be brought before international courts.

“The only thing that we expect is for this regime to go,” The Saudi FM stressed.

Several Lebanese leaders voiced their appreciation last August to Saudi Arabia for the $1 billion in aid extended to Lebanon’s army as it fights extremist Islamist militants coming from Syria in the Beqaa town of Arsal.

“The stances you voiced following the incidents in the Lebanese town of Arsal did not surprise us, and we are among the Lebanese people who appreciate and recognize your continuous support for Lebanon,” Lebanese Forces leader and presidential candidate Samir Geagea said in a letter addressed to Saudi King Abdullah Bin Abdel Aziz al Saud.

“We highly appreciate your stance regarding Lebanon’s independence, sovereignty and the liberty of its people, and your exceptional support to the Lebanese army and the security forces with $1 billion,” he added.

“The Saudi aid proves once again the country’s support for Lebanon’s stability and safety… Saudi Arabia stood by Lebanon during the civil war and offered several political initiatives to put an end to the war,” he said.

“The Custodian of the Two Holy Mosques has always been on Lebanon’s side … We appreciate his endeavors,” Gemayel said last August.

Hariri, who has close links to the Saudi royal family, announced the aid after visiting King Abdullah in Jeddah on August 5.
The aid would help Lebanese armed forces “maintain the security and stability of Saudi Arabia’s sister country, Lebanon,” Hariri was quoted by the Saudi agency as saying.