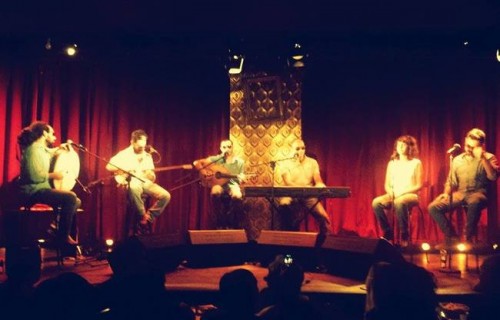 The Great Departed performs at Metro al-Madina in Beirut. [Nohad Topalian/Al-Shorfa]
Share:
As the U.S. and France launch airstrikes against the Islamic State, Lebanon’s artists and activists have been organizing one of the Middle East’s most strident cultural responses to the group following its rapid incursion on large swaths of Iraqi and Syrian territory this summer.

An IS flag-burning trend, accompanied by a Twitter hashtag campaign mimicking the recent “ice bucket challenge” charity fad, cropped up a few weeks back. The families of two dozen Lebanese soldiers captured by IS and the Al Qaeda-affiliated Nusra Front, meanwhile, have been blocking roads in protest of the government’s handling of the situation.

The Great Departed, a six-member musical group that blends traditional Arab instrumentation with a decidedly modern political outlook, has another form of invective. They’ve been performing “Madad Baghdadi,” a song satirizing IS and its self-proclaimed caliph, Abu Bakr Al Baghdadi, during weekly shows at a club in central Beirut to rousing applause from packed houses.

“Madad Baghdadi” is easily The Great Departed’s most popular song these days, a testament both to the fierceness of popular anger toward IS and the tune’s deft construction.

Dripping with sarcastic wit, it co-opts Baghdadi’s positioning as a religious leader to mock him. He’s described as a figurehead who upholds God’s laws and leads God’s servants – into “an abyss like no other.”

The Great Departed have other political songs. One pokes fun at Mohamed Morsi, the former Egyptian president, and his awkward pronouncements on drunk driving. Another makes sidelong critiques of Hezbollah, the Shia political and military group that plays a dominant role in Lebanon’s delicate sectarian setup.

“Madad Baghdadi,” though, is different. While Lebanese express themselves perhaps more freely than anywhere else in the Middle East, some boundaries are dangerous to cross lest powerful Sunni, Shia or Christian groups take offense. Those unspoken rules don’t apply with IS and Baghdadi, however, because of the broad national consensus against them.

Lebanon is complicated. But for The Great Departed and other Lebanese artists and activists, IS is refreshingly simple.

“In Lebanon it’s easy to insult Baghdadi, but it’s not easy at all to insult Hezbollah or Hamas,” said Khaled Soubeih, who plays keyboard in the group and wrote “Madad Baghdadi.”

The song was popular now because of Baghdadi’s rise, said Naim Asmar, another member of the group, but there weren’t any immediate plans to expand the anti-IS repertoire.

“We sing about the topics that are taking our daily thoughts and talks and gatherings and our nightmares and dreams,” he said. “You can’t think about love and flowers.”