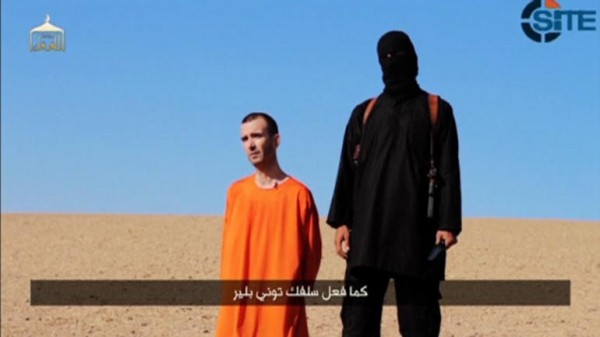 A still image taken from a purported Islamic State video released September 13, 2014 of British captive David Haines before he is beheaded. Islamic State militants fighting in Iraq and Syria released a video on Saturday which purported to show the beheading of British aid worker Haines. Reuters could not immediately verify the footage. However, the images were consistent with that of the filmed executions of two American journalists, James Foley and Steven Sotloff, in the past month. Haines, a 44-year-old father of two from Perth in Scotland, was kidnapped last year while working for the French agency Reuters/SITE Intel Group via Reuters TV
Share:

In response to the apparent beheading of David Haines, a kidnapped British aid worker, by the militant group Islamic State, U.S. President Barack Obama condemned the terrorist group and pledged to stand with Britain to “degrade and destroy this threat.” “The United States strongly condemns the barbaric murder of UK citizen David Haines by the terrorist group ISIL [an alternate name for the group],” the president said in a statement.

“Our hearts go out to the family of Mr. Haines and to the people of the United Kingdom. The United States stands shoulder to shoulder tonight with our close friend and ally in grief and resolve. We will work with the United Kingdom and a broad coalition of nations from the region and around the world to bring the perpetrators of this outrageous act to justice, and to degrade and destroy this threat to the people of our countries, the region and the world,” the statement said.

U.K. Prime Minister David Cameron responded to the news that broke Saturday by vowing to do anything in his power to “hunt down these murderers” and ensure justice is served.

The video released by the jihadist group reportedly mimics the same style of execution and production of the previous beheading videos of American reporter James Foley and Israeli-American Steven Sotloff. Dressed in the similar orange jump suit, a masked militant reportedly points to Cameron, and his predecessor, Tony Blair, and the country’s relationship with the U.S. as being responsible for Haines’ death.

“You entered voluntarily into a coalition with the United States against the Islamic State, just as your predecessor, Tony Blair,” Haines’ executioner said.