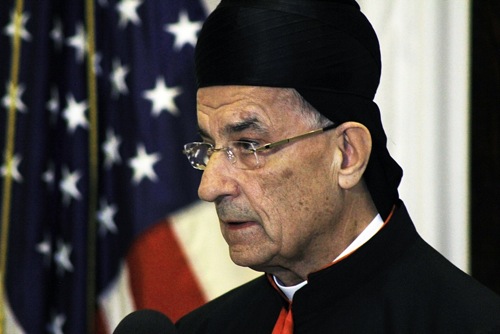 Patriarch Mar Bechara Boutros Cardinal Raï speaks at the In Defense of Christians press conference at the National Press Club in Washington, Sept. 10, 2014. He explained the issues facing Christians in Mosul, Iraq.
Share: 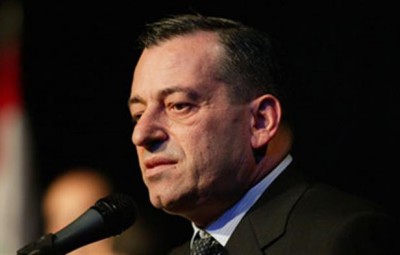 MP Antoine Zahra , a key member of the Lebanese Forces criticized on Friday Maronite Patriarch Beshara Rai for comments he made in Washington DC about the presidential impasse stressing that March 8 group was soley to blame for the continued presidential vacuum.

“How could you, Patriarch Rai, generalize, and say that all of us are responsible for the impasse? How could you allow yourself, given what you represent, not differentiate between those disrupting the Constitution and those who are committed to it?” Zahra said in a statement.

The Maronite patriarch said Thursday during his visit to the US capital that the political class as a whole was to blame for the inability of Parliament to elect a new president, saying that the March 8 and the March 14 coalitions could no longer continue “on two separate paths.”
.

Zahra went on to say:
“The March 14 coalition has a candidate who has a clear agenda and is committed to applying the Constitution. This same candidate also said that he would abandon his nomination to discuss the possibility of a consensus candidate.” He is referring to Lebanese Forces leader Samir Geagea who was the first to announce his candidacy and who declared on several occasions that he is willing to withdraw his candidacy if an agreement is reached on a consensus candidate.

“How then could you equate us with the other group whose candidate is still unknown? They’re the ones boycotting parliamentary sessions and refusing any consensus or agreement.” Zahra wondered

“As for him saying that March 8 and March 14 should not continue on different paths, I will allow myself to ask you this: What do you want us to do? Carry arms and join the Resistance Brigades? You want us to fight in Syria? You want us to boycott parliamentary sessions to elect a president?” Zahra asked and added

Zahra accused Rai of confusing the Lebanese people with his generalized remark .

“Your remarks confuse people and contradict the truth. Lebanon is facing two political agendas, and you implicitly support one of these agendas.”

“If you could convince March 8 to abandon their agenda, then we would welcome such a move. Until then, we hope you can convince them to attend parliamentary sessions.”

The Lebanese parliament failed for the eleventh time in a row to elect a president to replace Michel Suleiman whose term ended on May 25. Each time the parliament was unable to reach a quorum because the March 8 MPs which is led by the Iranian backed Hezbollah militant group and Aoun’s Change and Reform bloc boycotted the sessions.

Geagea was the first to announce his candidacy for the presidential office . Aoun has not officially announced his candidacy, claiming there should be a consensus on him first.

Last Sunday Geagea addressed the presidential election issue describing the continued presidential void as a “flagrant political crime.” and accused the March 8 of beheading the republic .

“It is a political crime when some parties seek to ‘behead the republic’ with the aim of becoming its head, and when they take the country hostage in order to get the presidential chair as a ransom,” Geagea said in a possible reference to Aoun who has reportedly been insisting that he should be the next president or no one else .