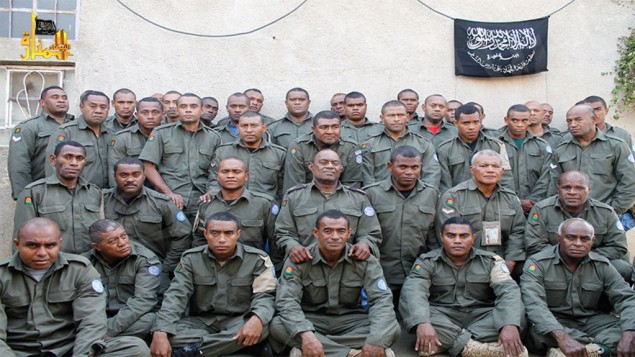 The group on Wednesday posted a video on its Twitter and YouTube accounts in which the hostages, from the South Pacific nation of Fiji, said they expected to be freed soon.

The head of Fiji’s army said on Wednesday the Islamist militant group had dropped all of its demands to free the 45 hostages, but at least slightly back-pedalled later in the day as the situation appeared to deteriorate.

It was unclear whether the video, carried by the SITE monitoring service, was made before or after the confusion surrounding those comments, but a U.N. source earlier told Reuters that the militants had insisted on such a video as a condition for the peacekeepers’ release.

“By the way, we are all safe and alive, and we thank Jabhat al-Nusra for keeping us safe and keeping us alive. I’d like to assure you that we have not been harmed in any way,” one hostage, who was not identified, said, using the Nusra Front’s full name.

“We understand that with the limited resources that they have, they have provided the best for us and we truly appreciate it and we thank them. We are thankful that Jabhat al-Nusra has kept its word and that we will be going home.”

Syria’s three-year civil war reached the frontier with Israeli-controlled territory last month when Islamist fighters overran a crossing point in the line that has separated Israelis from Syrians in the Golan Heights since a 1973 war.

The fighters then turned on the U.N. blue helmets from a peacekeeping force that has patrolled the ceasefire line for 40 years. After the Fijians were captured, more than 70 Filipinos spent two days besieged at two locations before reaching safety.

The Nusra Front had demanded compensation for fighters killed during the confrontation, humanitarian assistance for its supporters and its removal from the U.N. list of terrorist organisations.

Qatar, one country in the Middle East thought by the United States to have influence with the Islamist militant group, said Fiji had formally requested its assistance in freeing the hostages.

U.S. officials have said that Qatar played a critical role in persuading the Nusra Front to free American journalist Peter Theo Curtis last month, whom the front had been holding hostage since 2012.

Since independence from Britain in 1970, Fiji has sent more soldiers on U.N. peacekeeping missions than any other nation, on a per capita basis, which provides its stalled economy with much-needed hard currency and helps to bolster its global standing.