Catalonia president: ‘I would like a yes vote in Scotland’ 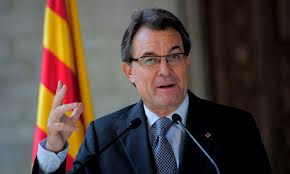 He said he believes that an independent Scotland would be able to successfully negotiate its entry into the European Union.

The Catalan president is committed to a similar vote in the Spanish region, to the one facing Scottish voters.

But before then, Spain’s constitutional court will almost certainly declare a Catalan referendum illegal, and the Spanish Government is deeply opposed.