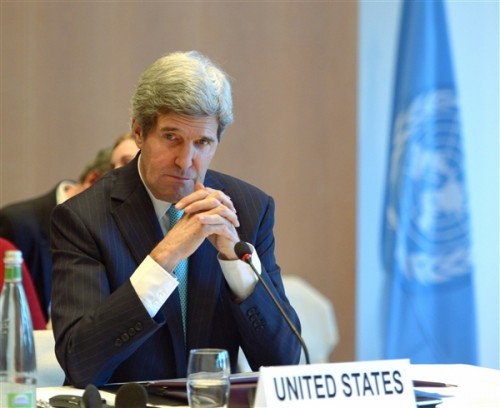 US Secretary of State John Kerry will meet Arab foreign ministers in Saudi Arabia on Wednesday, as he bids for a broad international coalition against the Islamic State (IS), a senior Egyptian foreign ministry official said.

The talks in the Saudi port city of Jeddah, which will continue into Thursday, will be attended by ministers from Egypt, Jordan and the six Gulf Arab states as well as Iraq, the official said on Tuesday.

“While travelling in the region, Secretary Kerry will also consult with key partners and allies on how to further support the security and stability of the Iraqi government, combat the threat posed by ISIL [IS], and confront Middle East security challenges,” a US State Department statement read.

On Monday Kerry vowed to build a long-lasting international coalition against the IS, saying almost every nation had a role to play in eliminating the group in Iraq and Syria.

Some countries will step up with “military assistance, both direct and in the form of training, arming, advising and equipping,” he said.

Others would contribute humanitarian aid for civilians caught in the IS’s crosshairs, help choke off its funding, and stem the flow of foreign fighters to the battlefields in Iraq and Syria by “demolishing the distortion of one of the world’s great peaceful religions” and counter-acting IS propaganda.

Kerry praised the “new and inclusive” Iraqi cabinet agreed late on Monday as a “major milestone”. It has “the potential to unite all of Iraq’s diverse communities,” he said, referring to the sectarian divisions currently plaguing the country.

He said “now is the time for Iraq’s leaders to govern their nation with the same vision and sense of purpose that helped to bring this new government together.”

Kerry will travel first to the Jordanian capital Amman before going onto Jeddah, however, other stops in the region are possible for the secretary of state who is known for his whirlwind diplomacy.

Iraq’s ambassador to the US Lukman Faily said the new government work seek to confront “the life-and-death challenges” facing the country.

“Now the hard work begins of ensuring that the government delivers for our nation and is accountable to all Iraqis,” he said in a statement issued on Monday. “The Prime Minister [Haider al-Abadi] has announced a series of confidence-building measures to translate this guiding principle into action.”

“The Prime Minister and his government have also committed to defeating ISIL [IS] and protecting Iraqis from violent extremists. We look forward to working with the international community and our neighbours in the continuing struggle against the terrorists who threaten us all.”

President Barack Obama also spoke with new Iraqi Prime Minister Haidar al-Abadi to congratulate him on the formation of a government, even though key security posts remain unfilled. Interior and Defence ministers, which have been vacant for four years, are yet to be appointed, although they are expected to be named within one week by the new prime minister.

“The prime minister expressed his commitment to work with all communities in Iraq as well as regional and international partners to strengthen Iraq’s capabilities to fight against this common enemy,” the White House said in a statement.

No US boots on ground

Obama will give a speech on Wednesday laying out his “game plan” on how to deal with the IS militants, after an outpouring of domestic anger followed the apparent beheadings of two American journalists in Syria.

The American president, however, has stressed he will not put US boots on the ground, after pulling the last troops out of Iraq in 2011. The American army has already carried out 148 air strikes against IS positions, after Obama authorised aerial attacks in early August.

Among countries which have publicly declared varying degrees of support for a coalition against the IS are Australia, Canada and Britain, as well as France and the UAE.

The 22-member Arab League agreed at a meeting on Sunday in Cairo to take the “necessary measures” to confront the militants.

Countries such as Albania, Estonia, Denmark, Finland and Japan have pledged financial aid for humanitarian assistance to help civilians caught in the battle, according to US officials.

But Kerry has already warned the fight against IS may not be quick, and may even have to be completed by the next White House administration — which takes over in 2017.

The coalition building will also continue on the side-lines of the UN General Assembly in New York later in September, when Obama chairs a meeting on stopping foreign fighters from joining the ranks of IS and other militant groups.