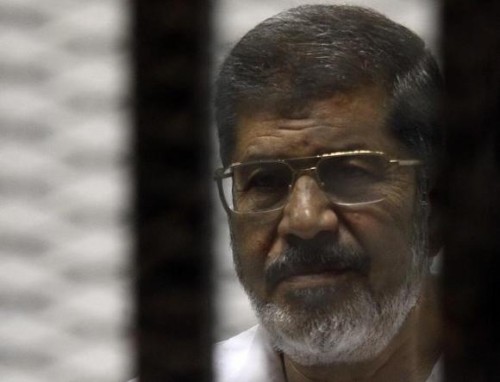 Ousted Egyptian president Mohamed Mursi stands behind bars during his trial at a court in Cairo, May 8, 2014. REUTERS/Stringer/Files
Share:
Egypt charged ousted president Mohamed Mursi and nine others on Saturday with endangering national security by leaking state secrets and sensitive documents to Qatar, furthering a state crackdown on his outlawed Muslim Brotherhood.

Relations between Qatar, a Gulf Arab state, and Egypt have been icy since July 2013, when Egypt’s then-army chief Abdel Fattah al-Sisi toppled Mursi after protests against his rule.

Qatar had supported Mursi, who is already in jail along with thousands of Brotherhood members, many of whom have been sentenced to death on separate charges.

Security sources had said last month that Egypt was investigating Mursi in connection with documents they said were leaked to Qatar and its satellite news channel Al Jazeera.

The Egyptian public prosecutor’s office said on Saturday its secret investigation had unearthed enough evidence of espionage to charge Mursi and nine others in a criminal court. The maximum penalty if convicted is death.

“The inquiries … exposed humiliating facts and the extent of the largest conspiracy and treason carried out by the terrorist Brotherhood organization against the nation through a network of spies,” it said in a three-page statement.

The public prosecutor said Mursi’s aides were involved in leaking to Qatari intelligence and Al Jazeera, documents which exposed the location of and weapons held by the Egyptian armed forces and detailed the country’s foreign and domestic policies.

The Qatari Foreign Ministry in Doha did not immediately respond to requests for comment on the accusations. Al Jazeera, which has been banned from Egypt, has denied any bias in reporting events there or any role in aiding the Brotherhood.

The Brotherhood dismissed the charges as political.

“Today is the start of yet another kangaroo trial… Mursi’s trials are politically motivated cases with trumped up charges and a corrupt judiciary presiding over it,” Abdulla El-Haddad, a Brotherhood spokesman based in Britain, said by email.

Mursi faces trial in five other cases as well, on charges ranging from violence to insulting the judiciary.

While Sisi has gone on to election as president, Mursi and other Brotherhood leaders as well as the leading lights of the 2011 popular uprising that toppled autocrat Hosni Mubarak, many of them secular activists, now languish in jail.

Hopes of democratic change inspired by the revolt in the most populous Arab country have since faded.

Sisi promised during his election campaign that the Muslim Brotherhood would cease to exist under his rule.

Egyptian security forces killed hundreds of Brotherhood supporters during protests against Mursi’s ouster and thousands of others have since been jailed.

Egypt’s oldest Islamist movement, once among Egypt’s most formidable political forces, has been branded a terrorist group and its assets have been seized by the state. The Brotherhood formally renounced violence as a means of political change decades ago and has denied any role in more recent bloodshed.

THE SECRETARY, HIS DAUGHTER AND THE AIR STEWARD

In a detailed statement, the prosecutor said his inquiry had found that Mursi’s secretary Amin al-Srifi abused his position to slip documents from Egypt’s security agencies to Jordanian Al Jazeera journalist Alaa Sabalan via his own daughter Karima and four other intermediaries.

It said Sabalan later flew to Doha and met with Al Jazeera news editor Ibrahim Hilal and a senior Qatari intelligence officer and a deal was reached for Mursi’s aides to hand over the documents in return for $1 million.

It added that part of that sum was paid after documents were handed over at Doha airport by an Egyptair steward who acted as a go-between. Subsequent interrogations had also linked Mursi and his office manager Ahmed Abdelatti to the case, it said.

Egypt’s rulers are deeply suspicious of Qatar and anyone who supports the Brotherhood. Egyptian authorities have long since closed down the Al Jazeera office in Cairo.

Earlier this year, an Egyptian court jailed three Al Jazeera journalists for up to 10 years on charges of aiding “a terrorist group” by broadcasting misinformation that harmed national security. Al Jazeera has said the charges are baseless.