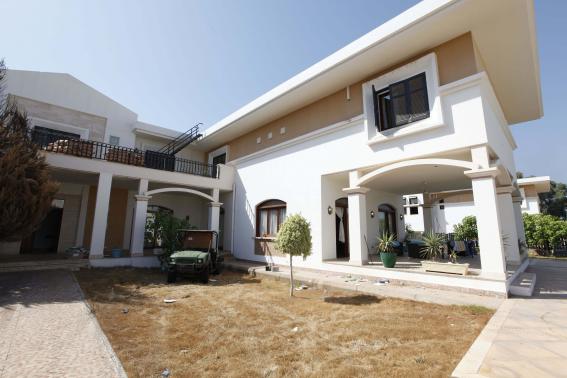 A view of an annex of the U.S. embassy in Tripoli during a media tour organised by Operation Dawn, a group of Islamist-leaning forces mainly from Misrata, August 31, 2014, after the group took over the annex. REUTERS/Ismail Zitouny
Share:
Members of a Libyan militia have taken over an abandoned annex of the U.S. Embassy in Tripoli but have not broken into the main compound where the United States evacuated all of its staff last month, U.S. officials said on Sunday.

A YouTube video showed the breach of the diplomatic facility by what was believed to be a militia group mostly from the northwestern city of Misrata. Dozens of men, some armed, were seen gleefully crowded onto the patio of a swimming pool, with some diving in from the balcony of a nearby building.

Libya has been rocked by the worst factional violence since the 2011 fall of Muammar Gaddafi, and a Misrata-led alliance, part of it which is Islamist-leaning, now controls the capital.

A takeover of the larger embassy compound could deliver another symbolic blow to Washington over its policy toward Libya, which Western governments fear is teetering toward becoming a failed state three years after a NATO-backed war ended Gaddafi’s rule.

The United States withdrew all embassy personnel from Tripoli on July 26, driving diplomats across the border into Tunisia, amid escalating clashes between rival factions.

The annex, apparently consisting of diplomatic residences and other facilities, lies about a mile (1.6 km) from the embassy compound. All sensitive materials were destroyed or removed from U.S. diplomatic sites in the capital before the evacuation.

Security in Libya is an especially contentious subject for the United States because of the Sept. 11, 2012, attack on the U.S. mission in Benghazi, in which militants killed Ambassador Chris Stevens and three other Americans.

Republican lawmakers have kept up steady criticism of President Barack Obama over his administration’s handling of the Benghazi attack, and they have also cited Libya’s latest unrest as another example of what they see as the Democratic president’s failed policy in the volatile region.

“Libya now is collapsed into a failed state,” U.S. Senator John McCain told CBS’s “Face the Nation” program. “That is what happens when you lead from behind.”

U.S. Ambassador to Libya Deborah Jones, in a message on Twitter, said the YouTube recording, posted by an amateur videographer, appeared to show “a residential annex of the U.S. mission but cannot say definitively.”

Jones, now based in Malta, said, however, that the embassy compound “is now being safeguarded and has not been ransacked.”

The U.S. government believes that while the annex has been seized, the main compound has not suffered a similar fate, a U.S. government source in Washington told Reuters.

Later on Sunday, a senior State Department official said in a statement: “We’ve seen the reports and videos and are seeking additional details. At this point, we believe the embassy compound itself remains secure but we continue to monitor the situation on the ground, which remains very fluid.

“The primary reason the United States temporarily relocated our personnel and operations from Tripoli recently was the ongoing fighting between militias occurring very close to our compound,” the official said. “We continue to work with the government of Libya and other parties on issues of concern.”

The Misrata-led groups refuse to recognize Libya’s central government and elected parliament, which have moved to the remote eastern city of Tobruk.

The Misrata forces have set up an alternative parliament which is assembling a rival government headed by Omar al-Hasi, an Islamist.

Hasi called on Saturday for diplomatic missions to return to Tripoli, saying foreigners would be protected.

The North African oil producer appears at risk of splitting or even sliding into civil war as political divisions and fighting among former rebels who helped topple Gaddafi have created uncertainty and chaos.