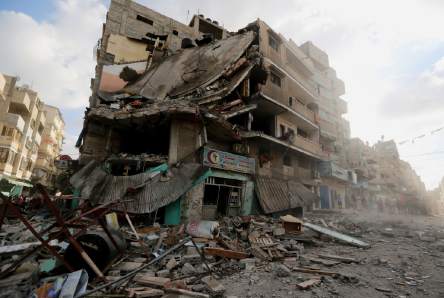 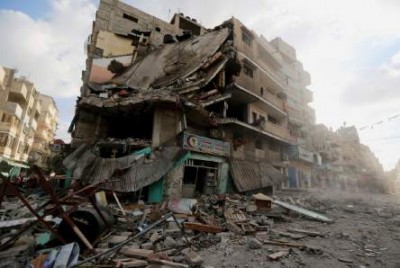 A ceasefire agreement between Israel and the Palestinians aimed at ending their seven-week conflict in Gaza went into effect on Tuesday and joyous Palestinians streamed into the streets of the battered enclave to celebrate.

Minutes before the Egyptian-brokered truce began at 1600 GMT (12.00 noon EDT), a rocket fired by Palestinian militants killed one person in an Israeli kibbutz, or collective farm, near the Gaza border, police said.

Palestinian and Egyptian officials said the deal calls for an indefinite halt to hostilities, the immediate opening of Gaza’s blockaded crossings with Israel and Egypt and a widening of the territory’s fishing zone in the Mediterranean.

A senior official of the Islamist group Hamas, which runs Gaza, voiced willingness for the security forces of Western-backed Palestinian President Mahmoud Abbas and the unity government he formed in June to control the passage points.

Both Israel and Egypt view Hamas as a security threat and are seeking guarantees that weapons will not enter the territory of 1.8 million people.

Under a second stage of the truce that would begin a month later, Israel and the Palestinians would discuss the construction of a Gaza sea port and Israel’s release of Hamas prisoners in the occupied West Bank, the officials said.

Israel gave a low-key response to the truce.

A statement issued by a spokesman for Prime Minister Benjamin Netanyahu said Israel had accepted the Egyptian proposal for “an open-ended ceasefire” and would attend Cairo talks on Gaza’s future only if there was a “total end to terror attacks” from the enclave.

The conflict has taken a heavy toll in the Gaza Strip. Palestinian health officials say 2,139 people, most of them civilians, including more than 490 children, have been killed in the enclave since July 8, when Israel launched an offensive with the declared aim of ending the rocket salvoes.

Sixty-four Israeli soldiers and five civilians in Israel have been killed.

Thousands of homes in the Gaza Strip have been destroyed or damaged in the most prolonged Israeli-Palestinian fighting since a 2000-2005 Palestinian uprising.

“We have mixed feelings. We are in pain for the losses but we are also proud we fought this war alone and we were not broken,” said Gaza teacher Ahmed Awf, 55, as he held his two-year-old son in his arms and joined in the street festivities.

Despite Israeli bombardments from sea and air and an offensive that included a ground invasion, Hamas was able to keep up cross-border rocket salvoes that reached Israel’s heartland, the commercial capital Tel Aviv. Many of the rockets were intercepted by the Iron Dome anti-missile system.

The Palestinian Center for Human Rights said 540,000 people had been displaced in the territory. Israel has said Hamas bears responsibility for civilian casualties because it operates among non-combatants. Israel says the group uses schools and mosques to store weapons and as launch sites for rockets.

In the run-up to the ceasefire, Israel increased pressure on militants to end persistent rocket strikes, bombing more of Gaza’s tallest structures in attacks that toppled a 13-storey apartment and office tower and destroyed most of a 16-floor residential building.

Israel, which said it was targeting Hamas control and command centers, had warned occupants to leave and no deaths were reported.

What is in the deal

As part of the deal, both sides have agreed to address more complex issues dividing them – including the release of Palestinian prisoners and Gaza’s demands for a sea port – via further indirect talks starting within a month.

* Hamas and other militant groups in Gaza agree to halt all rocket and mortar fire into Israel.

* Israel will stop all military action including air strikes and ground operations.

* Israel agrees to open more of its border crossings with Gaza to allow the easier flow of goods, including humanitarian aid and reconstruction equipment, into the coastal enclave.

* In a separate, bilateral agreement, Egypt will agree to open its 14 km (8 mile) border with Gaza at Rafah.

* The Palestinian Authority, headed by President Mahmoud Abbas, is expected to take over responsibility for administering Gaza’s borders from Hamas. Israel and Egypt hope it will ensure weapons, ammunition and any “dual-use” goods are prevented from flowing into Gaza.

* The Palestinian Authority will lead in coordinating the reconstruction effort in Gaza with international donors, including the European Union.

* Israel is expected to narrow the security buffer along the inside of the Gaza border, reducing it from 300 metres to 100 meters if the truce holds. The move will allow Palestinians more access to farm land close to the border.

* Israel will extend the fishing limit off Gaza’s coast to six miles from three miles, with the possibility of widening it gradually if the truce holds. Ultimately, the Palestinians want to return to a full 12-mile international allowance.

LONGER TERM ISSUES TO BE DISCUSSED

* Hamas wants Israel to release hundreds of Palestinian prisoners rounded up in the West Bank following the abduction and killing of three Jewish seminary students in June, an attack that led to the war. Hamas initially denied involvement in the killings, but a senior Hamas official in exile in Turkey last week admitted the group did carry out the attack.

* President Abbas, who heads the Fatah party, wants freedom for long-serving Palestinian prisoners whose release was dropped after the collapse of peace talks between Israel and the Palestinian Authority.

* Israel wants Hamas and other militant groups in Gaza to hand over all body parts and personal effects of Israeli soldiers killed during the war.

* Hamas wants a sea port built in Gaza, allowing goods and people to be ferried in and out of the enclave. Israel has long rejected the plans, but it is possible that progress towards it could be made if there are absolute security guarantees.

* Hamas wants the un-freezing of funds to allow it to pay 40,000 police, government workers and other administrative staff who have largely been without salaries since late last year.

* The Palestinians also want the airport in Gaza – Yasser Arafat International, which opened in 1998 but was shut down in 2000 after it was bombed by Israel – to be rebuilt.

The globe and mail