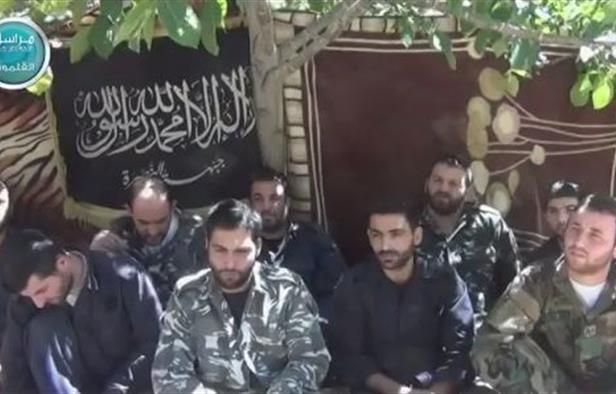 The jihadist Al-Nusra Front has posted a video showing kidnapped Lebanese security personnel calling on the Hezbollah movement to withdraw its fighters from Syria.

The nine men, who appear to be eight Lebanese policemen and a soldier, are among 24 security forces still in the hands of jihadists after fighting erupted on the Syrian border earlier this month.

In the video posted Friday night on Islamist websites, the men are seated in front of a black flag with the logo of Al-Nusra, the Syrian affiliate of Al-Qaeda.

Although the men say they are speaking freely, they use the language of Al-Nusra and other Sunni Muslim extremist groups in referring to the Shiite movement Hezbollah, which means “Party of God,” as the “Party of Satan.”

They call on their family members to stage demonstrations and block roads in Lebanon to protest Hezbollah’s involvement in Syria, where the Shiite group is fighting alongside the regime to put down a Sunni-dominated uprising.

One of them says the hostages have been warned they will be killed unless their families take action.

The men have been held hostage since an unprecedented outbreak of violence between jihadists and the Lebanese army in the Arsal region that began on August 2.

The fighting erupted after soldiers arrested a Syrian jihadist, prompting extremists to open fire on army positions and storm a police station.

Several days of fighting in the area, which lies on the Syrian border, killed 19 soldiers, 16 civilians and dozens of jihadists.

It ended with a truce negotiated by Lebanese Sunni clerics, but the jihadists withdrew from the area taking their hostages with them.

The clerics who negotiated the truce had been seeking the release of the hostages, but they announced in a statement on Friday that they were suspending their mediation efforts.

They said the decision was taken “to allow other parties that are more able to deal with this issue.”

Lebanon’s As-Safir newspaper said Saturday that the governments of Turkey and Qatar were now involved in negotiations to free the security forces.

The fighting in Arsal was the most serious border incident since the Syrian conflict began in March 2011.

The war has regularly spilled over into Lebanon, and raised tensions between Sunnis who back the uprising and Shiites who mostly side with President Bashar al-Assad.