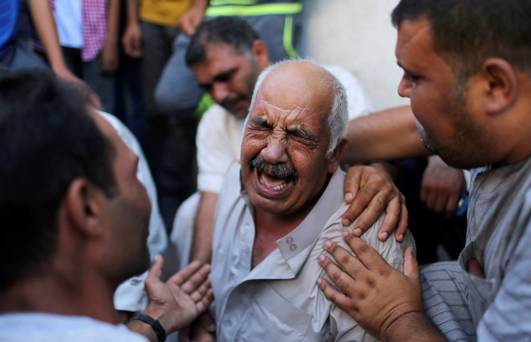 Israeli warplanes pounded Gaza on Saturday, killing five Palestinians from the same family, two of them children, as the war between Israel and Hamas entered a 47th day.

Eighty-one Palestinians and a four-year-old Israeli boy have been killed and nine Israeli civilians wounded since Tuesday, when truce talks collapsed ending nine days of calm.

Israel has vowed no let-up until it can guarantee the safety of its civilians, while Hamas insists that Israel must end its eight-year blockade of the territory as part of any truce.

The Israeli military said it had carried out more than 20 air strikes over the Gaza Strip on Saturday and that at least three rockets or mortar rounds had hit southern Israel.

Witnesses and Palestinian officials said two mosques were destroyed in the Khan Yunis area of southern Gaza, while a third, in the Shati refugee camp, which had already been damaged, was bombed again.

The deadliest Israeli air strike on Saturday levelled a home in Al-Zawayda in central Gaza, killing a couple, their sons aged three and four, and a 45-year-old aunt, medics said.

V
Another seven Palestinians were wounded in an Israeli strike that struck a house in Zeitun, east of Gaza City, medics said.
Prime Minister Benjamin Netanyahu vowed Friday that the army would exact harsh retribution for the killing of a four-year-old child by shrapnel that tore through his home in kibbutz Nahal Oz in southern Israel.

Daniel Tragerman was the first Israeli child killed since the current conflict began on July 8.

Israel said militants had fired the deadly mortar round from next to a school in the Zeitun neighbourhood of Gaza City.

Netanyahu said “Hamas will pay a heavy price for this attack,” his spokesman Ofir Gendelman said on his Twitter account.
The army and the Shin Bet security agency would “intensify ops against Hamas”, he added.

At least 2,097 Palestinians have been killed since July 8, 70 percent of them civilians, according to the United Nations.

On the Israeli side, 68 people have died, all but four of them soldiers.

It is the deadliest fighting of the Israeli-Palestinian conflict since the 2005 end of the second intifada, or uprising.

View gallery
On Friday, Hamas executed 18 people it accused of collaborating with Israel a day after three of its top commanders were assassinated in Israeli air strikes.

Another witness saw 11 people shot dead in a square near the remains of Gaza police headquarters, bombed by Israeli warplanes.

An 18th person was shot in front of bystanders in a separate incident.

The Western-backed Palestinian president and Hamas’s exiled leader urged the United Nations on Friday to draw up a “timetable” for the Israeli occupation of Palestinian territories to end, Qatar state media reported.

President Mahmud Abbas and Hamas supremo Khaled Meshaal issued the appeal during talks in Doha, hosted by the Qatari emir, a key backer of the Islamist de facto rulers of Gaza.

The two Palestinian leaders have been holding talks since Thursday, but little has filtered out.

Britain, France and Germany have advanced key points of a new UN Security Council resolution calling for an immediate and sustainable ceasefire, and the lifting of Israel’s blockade.

Diplomats said the text was aimed at advancing efforts to reach agreement within the 15-member council after a draft resolution from Jordan met with resistance from Israel’s US ally.

Washington has wielded its veto powers at the Security Council repeatedly in the past on behalf of Israel, although the now 46-day war has strained relations between the allies.

The new resolution proposes a mechanism to monitor the ceasefire and supervise the movement of goods into Gaza to allay Israeli security concerns.

It also calls for Abbas’s Western-backed Palestinian Authority to take back control of Gaza, seven years after his loyalists were driven out of the territory by Hamas.