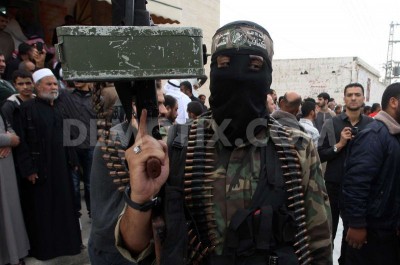 The armed wing of Hamas announced Thursday that three of its senior commanders were killed in a pre-dawn Israeli air strike in Rafah in the southern Gaza Strip that medics said killed eight people.

The UN Security Council on Wednesday urged Israel and the Palestinians to return to the negotiating table to quickly agree on a lasting truce in Gaza.

In a unanimously adopted statement, the 15-member council “offered full support to the Egyptian initiative and called upon the parties to resume negotiations to urgently reach a sustainable and lasting ceasefire.”

The statement drafted by France was agreed after negotiations in Cairo teetered on the verge of collapse amid a fresh flareup of violence in the war that has killed more than 2,000 Palestinians since July 8.

The measure fell short of a full resolution, but diplomats signaled they would be ready to move toward a stronger response if the Egyptian-led peace track hit a dead end.

“The urgency today was to respond to the fact that the talks appear to be breaking down and there has been a resumption of hostilities, and it was important for the Security Council to respond to that,” said British Ambassador Mark Lyall Grant, whose country holds the council presidency.

Earlier this month, Jordan circulated a draft resolution backed by Arab countries that calls for a ceasefire, the lifting of the Israeli blockade of Gaza and the delivery of urgently-needed aid to the Palestinians.

The fighting over the last six weeks marks the most violent confrontation between Israel and Hamas militants since the second Palestinian intifada, or uprising, from 2000-2005.

Palestinian representative to the United Nations Riyad Mansour said his side was ready to return to the negotiations in Cairo.

“We want a sustainable negotiated peace. We want to stop dying. We want the violence to end. In order to do that, Israel must cease its aggression and agree to a deal,” Mansour told reporters at UN headquarters in New York.

The armed wing of Gaza’s Islamist rulers Hamas warned foreign airlines against flying into Tel Aviv on Wednesday and declared the Cairo talks over.

Israeli warplanes carried out dozens of air strikes across Gaza in response to multiple rocket attacks on southern Israel, as nine days of calm exploded into bloodshed.

In the statement, the council expressed “grave concern” at the return to hostilities and the loss of civilian lives.

It called on the sides to “prevent the situation from escalating and to reach an immediate humanitarian ceasefire” as a first step toward a deal on a lasting truce.

UN Secretary-General Ban Ki-moon condemned the flareup in violence on Tuesday and called on both sides to reach “an immediate understanding on a durable ceasefire.”

The armed wing of Hamas warned foreign airlines on Wednesday against flying into Tel Aviv, threatening to step up its six-week conflict with Israel and declaring truce talks in Cairo over.

“We are warning international airlines and press them to stop flying into Ben Gurion airport from 6 am (0300 GMT) Thursday,” said Ezzedine al-Qassam Brigades spokesman Abu Obeida in a televised speech.

Dressed in military fatigues with his face wrapped in a red and white chequered headscarf, he said Hamas was abandoning efforts to negotiate a durable ceasefire with Israel at Egyptian-brokered talks.

“We are calling on the Palestinian delegation to withdraw immediately from Cairo and not to return,” said Abu Obeida in a speech broadcast on Hamas’s Al-Aqsa TV channel.

“There will be no return to talks after today and any move in this direction will never achieve any result,” he added.

“The enemy lost a golden chance to reach a ceasefire with limited demands, for which it will pay after today.”

The wife and seven-month-old son of the Qassam Brigades’ commander Mohammed Deif were killed in an Israeli air strike on a building in Gaza City late Tuesday, but Hamas said Deif was still alive.

The conflict between Israel and Hamas has killed 2,047 Palestinians and 67 on the Israeli side since July 8. Palestinian emergency services say more than 10,240 Palestinians have been wounded.