U.S. bars all American airlines from flying over Syria 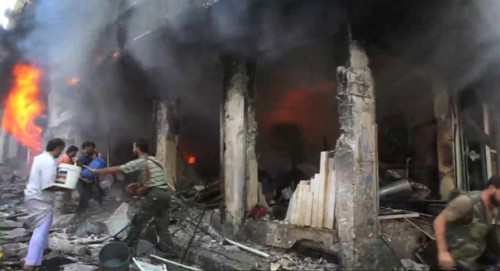 This image taken from video filmed by an independent cameraman and made available on Tuesday, Sept. 4, 2012 shows Syrian men throwing buckets of water toward a burning building in Myasar neighborhood, Aleppo, Syria. Government jets bombed the residential area of Myasar, reducing many of its buildings to rubble and causing a huge fire. (AP Photo/APTN)
Share:

The U.S. Federal Aviation Administration has barred all American airlines from flying over Syria, saying the ongoing conflict poses a “serious potential threat.”

The FAA had previously warned American carriers to avoid flying over Syria. The new rule requires operators to contact the FAA before operating in the airspace.

The agency said the move was taken after “updated assessment of risk” and a lack of airlines wishing to fly in the airspace.

“The ongoing armed conflict and volatile security environment in Syria poses a serious potential threat to civil aviation,” the FAA said in a statement.

Airlines have been paying close attention to flight paths over conflict zones since Malaysia Airlines Flight MH17 was downed by a suspected surface-to-air missile last month while flying over eastern Ukraine, where pro-Russia separatists are fighting Ukrainian troops. All 298 people on board died.

The FAA also said “opposition elements” had warned civilian airlines not to provide service to Syria. Armed extremist groups in the country are known to be equipped with anti-aircraft weapons that could threaten civil aircraft, the agency said.

The ban applies to all U.S.-registered planes, commercial operators and FAA-licensed pilots. It makes an exception for flights operated with U.S. government permission and U.S.-registered aircraft operated by foreign carriers.

“Due to the presence of anti-aircraft weapons among the extremist groups and ongoing fighting in various locations throughout Syria, there is a continuing significant potential threat to civil aviation operating in Syrian airspace,” the agency said. (1.usa.gov/1le4WiH)

The FAA this month also restricted U.S. airlines and commercial operators from flying over Iraq while armed conflict raged and the United States launched air strikes.