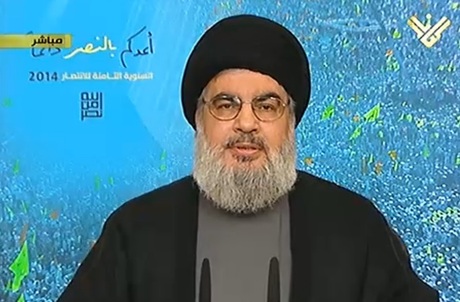 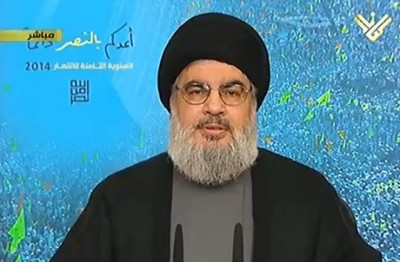 The Hezbollah leader described the radical Islamist movement that has seized large areas of Iraq and Syria as a growing “monster” that could threaten Jordan, Saudi Arabia, Kuwait and other Gulf states, according to an interview printed on Friday.

In a separate speech, Sayyed Hassan Nasrallah said Islamic State also posed an existential threat to his own nation, Lebanon, the target of an incursion by Islamist insurgents from Syria this month. He said his heavily armed Shi’ite Muslim group was ready to fight the threat in Lebanon – if required.

The Iranian-backed Hezbollah has been helping Syrian President Bashar al-Assad fight a Sunni Islamist-dominated insurgency that spilled into the Lebanese border town of Arsal on Aug. 2, triggering five days of battles between the Lebanese army and militants including members of Islamic State.

“Here we live, and – if the battle is imposed on us – here we fight and here we will be martyred,” said Nasrallah. Hezbollah said it stayed out of the Arsal battle, wary of inflaming sectarian tensions with Lebanese Sunnis, many of whom have supported the uprising against Assad.

Nasrallah was speaking on the eighth anniversary of the conclusion of Hezbollah’s one-month war with Israel.

Addressing the wider threat to the region from Islamic State, Nasrallah said it could easily recruit in other Arab states where its hardline ideology exists. Even Turkey, the passage for many foreign fighters into Syria, should beware.

“Wherever there are followers of the ideology there is ground for (Islamic State), and this exists in Jordan, in Saudi Arabia, in Kuwait and the Gulf states,” Nasrallah said in the interview with the Lebanese newspaper Al-Akhbar.

Nasrallah, whose group is backed by Shi’ite power Iran, said Islamic State was encountering resistance in some parts of Iraq and Syria. But “it appears that the capabilities, numbers and capacities available to (Islamic State) are vast and large. This is what is worrying everyone, and everyone should be worried.”

Saudi Arabia, a Sunni Muslim monarchy that has been in a state of cold war with Shi’iteIran and its allies, has shown growing signs of alarm about the spread of Islamic State. Last month, it deployed 30,000 soldiers at its border with Iraq.

Saudi Arabia has also been a major sponsor of the anti-Assad uprising.

Hezbollah’s role in Syria has helped Assad beat back the rebellion against his rule in critical areas of the country including Damascus and a corridor of territory stretching north from the capital. But large parts of Syria’s less densely populated north and east have fallen to Islamic State.

“This danger does not recognise Shi’ites, Sunnis, Muslims, Christians or Druze or Yazidis or Arabs or Kurds. This monster is growing and getting bigger,” said Nasrallah.

Nasrallah reiterated his defence of Hezbollah’s role in the Syrian conflict, the focus of criticism from Lebanese opponents who say the group has provoked Sunni militant attacks in Lebanon.

Most recently, insurgents including members of Islamic State seized the town of Arsal at the Syrian border, battling the Lebanese army for five days before withdrawing with 19 soldiers and 17 policemen as captives.

Nasrallah said the insurgents would have advanced as far as the Lebanese coast were it not for Hezbollah’s role fighting them in areas of Syria just east of the Lebanese border.

“Going to fight in Syria was, in the first degree, to defend Lebanon, the resistance in Lebanon, and all Lebanese,” he said.

A Hezbollah commander was last month killed in Iraq near Mosul, a city seized by Islamic State in June, suggesting the group may also be helping pro-government forces there.

Hezbollah has not officially announced any role in Iraq.

Nasrallah linked the threat posed by Islamic State to the spread of Wahhabism, a puritanical school of Islam followed in Saudi Arabia that demands obedience to the ruler but which has been widely blamed for fuelling Sunni radicalism.

“(Islamic State) does not have borders. There is a real danger and a real fear among many states and authorities, because one of the advantages of this organisation is its capacity to recruit among followers of al Qaeda-Wahhabi thought,” he said.