Lebanon parliament failed for tenth time to elect a president 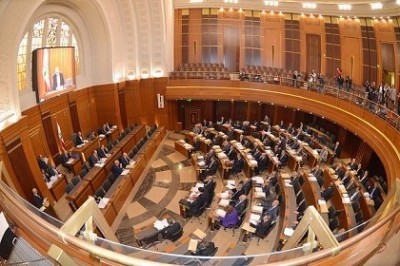 The Lebanese parliament failed for the tenth time in a row to hold a session to elect the country’s new president to replace Michel Suleiman whose terms ended on May 25.

Lebanese Forces leader Samir Geagea held a press conference in which he blamed Change and Reform bloc leader MP Michel Aoun on Tuesday for the vacuum in the president’s seat.

“There is no way to resolve the presidential deadlock unless General Aoun decides to change his mind [and attend parliament sessions to elect a president], which will never happen unless he [is promised] to become president,” Geagea said .

Geagea also said that the repetitive failing attempts to elect a president would make people used to not having a president.

“This step makes people accustomed to presidential vacuum… and that life goes on normally as if nothing happened,” he said.

After Geagea secured 48 votes last April 23, the Hezbollah led March 8 alliance including MP Michel Aoun and MP Suleiman Franjieh walked out from the parliament to make sure there was no quorum to elect a president. They continued their boycott of the parliament during the other sessions that followed .

Aoun has not announced his candidacy but he aspires to become a consensual nominee
“I will announce my nomination when the political situation in parliament becomes clear and when (the current candidates) are dismissed,” Aoun said last month