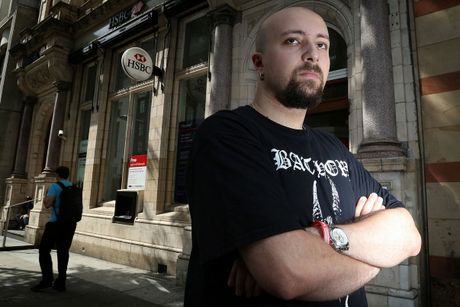 Majid Maghout, a 26-year old Syrian on a student visa, did not receive a letter and only found out that his two-year-old account would be closed when he tried to withdraw money and his debit card was swallowed by the ATM.
Share:

HSBC has been accused of “shamelessly profiling” its customers by ethnicity after it closed bank accounts belonging to Syrian refugees and students in the UK just days after it was accused of discriminating against Muslim clients.

Documents and email correspondence obtained by The Independentshow that HSBC, which styles itself as the “world’s local bank”, sent letters to Syrian clients living in the UK telling them their accounts would be closed and giving them two months to find a new bank. It cited “increased requirements for compliance with international obligations concerning payments to and from sanctioned countries”.

The letters claimed that the decision to terminate their accounts was based on the bank’s “own assessment of risk” and did not reflect the manner in which they conducted their business.

“We appreciate that you will be disappointed by this decision,” read the letters. “Whilst we don’t expect you to agree with the decision taken, we hope you understand that such decisions are a necessary part of the management and practices by which HSBC chooses to operate its business.”

Majid Maghout, a 26-year old Syrian on a student visa, did not receive a letter and only found out that his two-year-old account would be closed when he tried to withdraw money and his debit card was swallowed by the ATM.

“I contacted HSBC and they simply told me my account would be closed and I should have received a letter from them,” he told The Independent. “HSBC told me it had nothing to do with me as customer – the issue was that I was a Syrian citizen.”

“I’m a student. I have no money and I’m here thanks to a scholarship. I live on £400 a month and I’ve never transferred money to Syria. This is a case of discrimination. They could have checked my balance and my records, but they simply decided to close my account.”

Mohammad Isreb, who has a Tier 1 UK visa (the category for highly skilled workers), opened his HSBC account in 2006 but has now been told it will be closed. “After I was sent a letter, I told HSBC that being a Syrian national is not a valid reason to cancel my account. I’ve not breached any laws.

“This is adding tremendous pressure on Syrians who are already in a difficult situation. They could have checked my account and see that I haven’t received or sent [any money] to Syria. This is stabbing Syrians in the back. The sanctions are against the Government, not the people of Syria.”

Another person whose account has been closed by the bank said she found it extremely difficult to open an account elsewhere due to her refugee status, as she did not have a passport.

HSBC’s actions have been criticised as discriminatory by the human rights group Refugee and Asylum Seeker Participatory Action Research (Rapar) and the Rethink Rebuild Society, which describes itself as a non-profit organisation in solidarity with the Syrian people.

Both groups have launched a petition to denounce what they describe as the “systematic targeting” of Syrian citizens. They have accused HSBC of leaving “vulnerable customers” with no history of transferring money to or from Syria in a precarious situation.

Yasmine Nahlawi, a spokesperson for Rapar, said: “HSBC’s blatant abuse of its power over its Syrian customers is utterly unacceptable and shamefully discriminatory.”

The US, the EU, Turkey and the Arab League have all imposed sanctions on Syria, including asset freezes, travel bans and, most crucially, a halt in crude oil imports, in a bid to force President Bashar al-Assad to de-escalate the violence ravaging the country after three years of civil war.

Last year HSBC announced it would close the accounts of some its Syrian clients in the Middle East and North Africa to comply with “enhanced oversight on any customer with connections to sanctioned countries”.

But the bank is yet to announce a formal extension of the policy to clients in Europe and insisted that the closure of the accounts belonging to Syrian clients in the UK was the result of individual assessments of risk.

HSBC, which was fined $1.9bn (£1.2bn) for money laundering by US authorities in 2012, has undertaken what it describes as a “five filter” assessment test for its accounts. At the time, the bank admitted it had failed to implement proper anti-money laundering controls, allowing Mexican drug cartels to funnel cash into the US.

Denying its practice was discriminatory, a spokesperson for the bank said: “HSBC is committed to adopting and enforcing the most effective standards to combat financial crime across its operations globally. This includes ensuring we have appropriate policies for how we do business and with whom.

“This applies to customers with links to a country that is subject to international financial sanctions. In certain cases, an assessment of the risks involved may require ending a customer relationship.”

The latest round of account closures comes just days after HSBC was accused of targeting Muslim clients, including the Finsbury Park mosque in north London, as part of what critics said was an “Islamophobic campaign”.

HSBC said the accounts in question “fell outside the bank’s risk appetite”, but insisted that the decision was “not based on the race or religion” of its clients. It refused to say how many customers had been affected.

The bank is one of many around the world to have been fined over inadequate anti-money laundering controls. This week, a number of senior bankers have spoken out against the increasing tide of regulations on doing business in countries where US sanctions are in place, or where money laundering is a risk. They have also complained loudly about the punishments incurred when they fall foul of the rules.

Standard Chartered’s head of Asia, Jaspal Bindra, complained yesterday that “we are supposed to police that our counterparties and clients are not money laundering, and if when we are policing we have a lapse, we don’t get treated like a policeman who’s had a lapse – we are treated like a criminal”.

His words follow HSBC chairman Douglas Flint’s warning of a “growing danger of disproportionate risk aversion” crippling banks, while  Lloyds chief executive Antonio Horta-Osorio has argued that staff could be  “incentivised to do nothing” because of over-zealous regulation.

But in a statement to The Independent, the Financial Conduct Authority, the City watchdog, told banks they should get on with reform.

The FCA’s director of policy, risk and research, Chrisopher Woolard, said pointedly: “Financial services firms need to be able to operate successfully. That should not be at odds with regulation designed to protect consumers, promote competition and ensure market integrity.”

Mr Woolard was speaking as it emerged that Bank of America Merrill Lynch is close to agreeing a record $16bn (£9.5bn) settlement with authorities that have been investigating the way in which securities were sold in the run-up to the financial crisis.

The settlement eclipses the $9bn paid by French bank BNP over sanctions busting.

Case studies: ‘This is discrimination’

Majid Maghout, a 26-year old Syrian on a student visa had his debit card swallowed by an ATM. “I’m a student, I have no money. I’m here thanks to a scholarship. I live on £400 a month and I’ve never transferred money to Syria. This is a case of discrimination.”

“It was extremely difficult for me to open another bank account. Lloyds told me I couldn’t open an account with refugee status as I needed a passport. I don’t have one because I am refugee. “

Refugee B (also requested anonymity) found out her account would be closed in December 2013. “I went to see them. The only thing they said was that I am a Syrian citizen and there are sanctions on Syria. I didn’t breach any law. I didn’t send or receive money from Syria.”