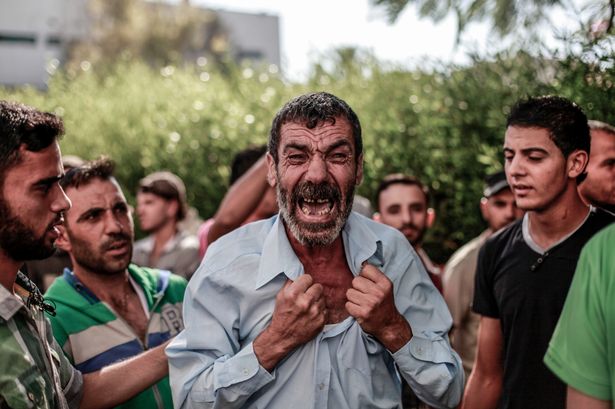 Father’s Grief: The father of one of the four boys, all from the Baker family, killed during Israeli shelling, react outside the al-Shifa hospital in Gaza City.
Share:

Israel has evidence that almost half of Palestinians killed in the 25-day-old Gaza war were combatants, its deputy foreign minister said on Saturday, pushing back against international allegations of a lopsidedly heavy civilian death toll.

Gazan human rights groups say at least 80 percent of the 1,669 Palestinians killed have been non-combatants, including hundreds of children. The U.N. Human Rights Council last week accused the Israelis of “disproportionate and indiscriminate attacks” and launched an inquiry into possible war crimes.

Israel, which has lost 63 soldiers and 3 civilians to the fighting, says it has done everything possible to avoid harming innocents and that Gaza’s dominant Hamas Islamists invite such casualties by operating in densely populated areas.

“There is research being done in the military, very professionally and reliably, (whose) conclusion is that at least 47% of the fatalities are terrorists, with photographs and names,” Tzachi Hanegbi told Israel’s Channel Two television, adding that the data would be presented to investigators.

He did not elaborate. Israel rejected the U.N. Human Rights Council’s probe announcement, describing the forum as biased, but usually conducts its own combat inquiries.

Israel says Hamas and other Palestinian guerrillas in Gaza are terrorists and in past conflicts has used broad definitions of combatants – including, for example, Palestinian policemen working for the Hamas administration.