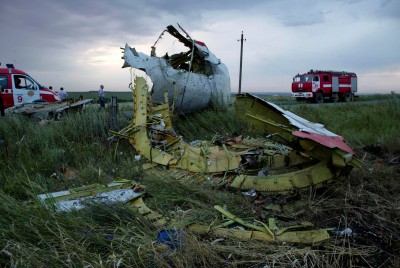 Firefighters arrive at the crash site of Malaysia Airlines Flight 17 near the village of Hrabove, Ukraine, on July 17, 2014.
Share:

Ukrainian authorities said Monday that black-box data from the downed Malaysia Airlines Flight 17 revealed shrapnel from a missile caused “massive explosive decompression” onboard, as the U.N. human-rights chief said the aircraft’s shooting down “may amount to a war crime.”

U.N. High Commissioner for Human Rights Navi Pillaysaid that “this violation of international law, given the prevailing circumstances, may amount to a war crime. It is imperative that a prompt, thorough, effective, independent and impartial investigation be conducted into this event.”

All 298 people aboard MH17 died when the passenger jet fell from the sky in eastern Ukraine on July 17 after being struck by a missile believed by the U.S. to have been fired from territory under the control of pro-Russian separatists.

Ukrainian authorities pointed to “massive explosive decompression” from missile shrapnel as the cause of the crash on Monday, the Wall Street Journal reports, though European officials analyzing the on-flight recordings have not confirmed the conclusion. Explosive decompression happens when the air inside an aircraft depressurizes at an extremely fast rate, with results similar to a bomb detonation.

Clashes in Ukraine, meanwhile, continue to block outside authorities from conducting a proper investigation. At the crash site, however, Dutch and Australian authorities were blocked from recovering bodies and gathering forensic evidence for the third day in a row Monday because of continuous fighting in the area.

Clashes between Ukrainian government forces and pro-Russian separatists have killed an estimated 1,129 people and wounded 3,442 since mid-April, according to a U.N. analysis of casualties.

“I would like to stress to all those involved in the conflict, including foreign fighters, that every effort will be made to ensure that anyone committing serious violations of international law including war crimes will be brought to justice, no matter who they are,” said Pillay. “I urge all sides to bring to an end the rule of the gun and restore respect for the rule of law and human rights.”