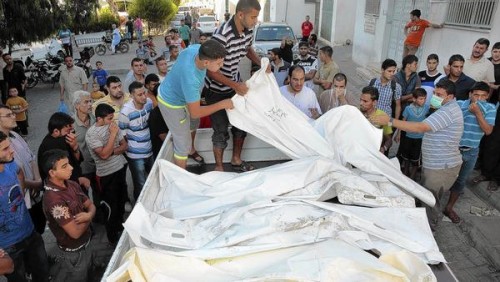 The bodies of 11 members of the Hilo family, who died in the bombing of their Shajaiya home, are taken for burial in Gaza City. (Carolyn Cole / Los Angeles Times)
Share:

It was a day to take stock of the damage, search for the missing and bury the dead.

At 8 a.m. Saturday, guns fell silent across much of the Gaza Strip for a 12-hour pause in fighting between Israel and Hamas. Palestinians surged into devastated areas to see what remained of their homes and recover a few precious belongings. On the Israeli side, the truce meant a welcome respite from the need to rush to a shelter whenever sirens warned of approaching rockets.

Despite the ferocity of the fighting over the last 19 days, many of those who ventured out in Gaza weren’t prepared for what they found: yawning craters, pancaked homes and mountains of debris.

Jamila Shaker fished a man’s sandal from the wreckage of her home in Shajaiya, a neighborhood on the east side of Gaza City. She held it to her breast.

Khalid Biltaji, 64, stood before the ruins of his house in Shajaiya and wept.

“A lifetime’s worth of work, and now it’s gone,” said a cousin, Mohammed Biltaji, 38.

As Western and Middle East diplomats pressed for a longer truce, Israel announced that it would extend the pause in fighting by four hours, and then a full day, even while continuing to hunt for and destroy Hamas’ network of tunnels. But the militant group, which controls Gaza, rejected the extensions and fired another salvo of rockets toward central Israel.

Minutes before the 12-hour truce took effect, an Israeli strike on a house in the southern Gaza city of Khan Yunis killed 20 people, said Ashraf Qidra, a Health Ministry spokesman. The victims included at least 12 members of a family sheltering there from fierce clashes in the nearby village of Khuza.

Even during the pause in fighting, the crackle of gunfire could be heard sporadically, and drones circled overhead. Warning shots were fired at ambulances that tried to enter two border areas, news reports said. But no major battles broke out.

With the stench of death in the air Saturday, more than 130 bodies were pulled from under rubble where they had lain for days in neighborhoods cut off by fighting, pushing the Palestinian death toll above 1,000.

Saturday also brought word of more Israeli military deaths, a blow in a country where virtually every Jewish citizen has a friend or relative serving in the military, particularly now that nearly 60,000 reservists have been called up.

The army announced the deaths of seven more soldiers, raising the number to 42. Three civilians have also died on the Israeli side, including a foreign farmworker.

The two sides had agreed to the hiatus at the urging of Secretary of State John F. Kerry and other mediators, who were seeking to forge a longer truce in time for the upcoming Muslim feast marking the end of the holy month of Ramadan. The feast is expected to begin Monday. Diplomats voiced hope that a more substantive cease-fire would soon be in place, with all parties’ longer-term security and economic interests addressed.

Although most of the more than 2,000 projectiles fired by Hamas and its allies since July 8 have fallen harmlessly or were intercepted by Israel’s antimissile system, the rocket fire has been a nerve-fraying reality for nearly three weeks, particularly now that so much of the country, even cities to the north of Tel Aviv, is within rocket range.

Police in Tel Aviv dispersed a peace rally of several thousand people after Hamas started firing rockets again. The protest had been allowed under the assumption that the truce would hold.

Israelis have been shaken by the discovery of a large and sophisticated network of underground passageways in the Gaza Strip, many of them designed to funnel attackers across the frontier.

In Gaza, Saturday’s respite allowed many who had been trapped in their homes or temporary shelters to reunite with scattered family members, make hospital visits and search for desperately needed supplies. Fishermen cast their nets for the first time in days, and children splashed in the waves.

Markets were jammed with people stocking up on food, clothing and batteries to see them through daily power outages.

Suhaila Sadi, a 60-year-old woman in a face-concealing white veil, browsed through piles of shirts spread out on a vendor’s table in downtown Gaza City. One with a leopard print caught her eye.

“I want to buy a shirt or two because we left our house with nothing,” she said. “We barely left with our skin.”

Promptly at 8 a.m., people began flooding into the ruined district of Shajaiya, which had been largely inaccessible because of airstrikes and gunfire exchanges that all but leveled parts of the neighborhood.

Shajaiya is known as a militant stronghold. Posters of suicide bombers and others who died in the wars with Israel are plastered on walls in the less damaged parts.

But the densely packed neighborhood was also home to large extended families, who were caught up in the bombardment and street battles.

Mahmoud Hilo, a 28-year-old emergency room technician, kept a vigil with his cousins as rescue workers pulled the bodies of 11 members of his family from a mound of rubble.

He said the family had received Israeli leaflets and recorded phone messages July 19 warning them to evacuate. But he said there was already shelling, and they did not think it was safe to leave.

He was at work, but kept in touch with them by phone. When they stopped answering his calls, he knew something had happened.

Neighbors told him that an Israeli jet fired two rockets at the house, but he could not get to the area until authorities announced a brief pause in the fighting the following day.

Neighbors told him they had heard voices from the rubble. Clawing through it, they found his 25-year-old cousin, Asma. Only her nose and mouth were visible. They dug her out, but shells were falling again as they raced her to an ambulance.

“We were running with her for our lives,” he said.

She died soon after.

As rescue workers recovered the rest of his family Saturday, neighbors emerged from their homes carrying bags of clothing and strapped mattresses to the roofs of their cars.

Mohammed Harara, 35, was among those hurrying down a rubble-strewn street, stopping at a modest three-story concrete-block house. All its windows were blown out, and its contents were scattered in the street.

Harara cursed, then went inside to see what could be salvaged. Incredibly, some tiny yellow chicks emerged from the debris peeping.

In a knocked-down wardrobe, Harara found a laundry basket still filled with clean clothes, which he planned to take to his wife and children sheltering with various relatives.

His family had fled the morning of July 20, amid intense gun and artillery fire. They were barely 50 yards from the house when it was hit by a shell, he said.

Another strike ripped apart two ambulances that had pulled up in front of a neighbor’s house. Their blackened and twisted forms lay in the street Saturday.

The blast sent a paramedic’s body flying past the fleeing family, Harara said. “We were seconds from death.”

Next door, Mohammed Biltaji picked his way through the debris-strewn ground floor of the family home. The second floor was gone. He pointed out the tiny sitting room at the back of the house where dozens of family members had huddled through the terrifying explosions a week ago. A shell had sent shards of glass flying into the room.

“This is my father’s blood,” he said, pointing to a large brown patch on the floor. “The ambulance people ripped the curtains to bandage his head.”

Farther down the road, a group of men emerged from a basement carrying a body wrapped in a blanket. Mangled donkeys and a camel carcass lay on the ground.

Around a corner, two Israeli tanks stood under some trees.

Nearby, Souleiman Jamal, 65, sank down onto a pile of wooden crates to catch his breath. On the bullet-scarred wall behind him, a wedding party was announced in neon paint.

He couldn’t reach his house, he said. As he approached the end of the road, what he took to be warning shots were fired in his direction.