For Rouhani to succeed, the Guards must relinquish their power 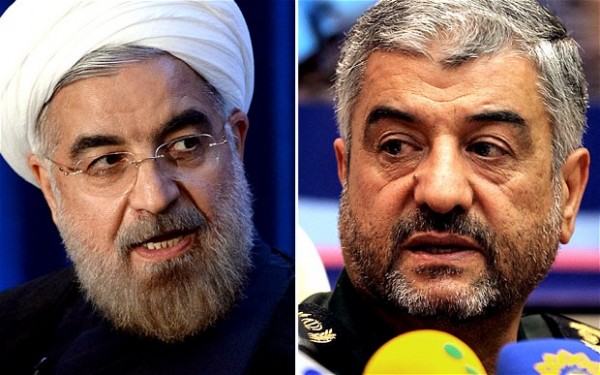 In his first private meeting with Iran’s top brass in the Revolutionary Guard and the regular army this week, President Rouhani reminded his audience that the Iranian people’s national unity and strength in facing any external threat fully depends on how they perceive the country’s armed forces.

“If they [the armed force] rule over the hearts of the nation and reflect on their aspirations, then they will receive the people’s respect and loyalty”, Rouhani said during the meeting.

The Centre for a Democratic Iran, a non-profit organisation whose mission is to promote and pursue an independent, peaceful and democratic Iran, followed these events with great interest. CDI Founder, Behrooz Behbudi, offered his thoughts on the meeting:

“There is no doubt that as things stand in the Middle East, Iran and the Iranians are facing a multiple of external threats from the turmoil in their neighbouring countries, as well as the farther areas of the region.

However, in a closer look, the roots of these threats can be traced to the very centres of power within the country’s theocratic regime that has a foreign policy that effectively invites such threats.

Since its inception 35 years ago, the undemocratic rulers of the Islamic republic have changed the main objective of the Iranian people from achieving democracy in opposing the former regime into a “holy mission” that seeks to “export the Islamic revolution” and challenges the US and its allies.

This political paranoia that has been constantly fueled by the pro-Russian members of the Tudeh Party and radical Islamists was behind the seizure of the US Embassy in Tehran in 1980, leading to decades of hostilities between the two countries.

However, if the political leaders of the regime, including Mr. Rouhani, who once built their public image on their anti-Americanism have now changed their views in the face of the calamities that this twisted ideology has brought to Iran, there still remains a minority hardline clique within the regime that continues its existence by keeping a distance between Iranians and the West.

This “resistance” line is embedded within the top leadership of the Revolutionary Guard who get their ideological direction fromIran’s totalitarian religious ruler ayatollah Ali Khamenei.

As such, the Guard’s active involvement in the trouble spots of the Muslim world is in fact the most dangerous external threat thatIran faces at the moment.

From Iraq and Syria to Lebanon and Afghanistan, members of the Revolutionary Guard have been supplying arms and logistics to radical militia groups who advocate wars and instability throughout the region.

Further more, the Guards have consistently sided with the repressive factions of the Islamic republic regime in cracking down onIran’s pro democracy and civil rights movement, effectively turning them into the internal threat to the Rouhani government.

If President Rouhani wants to remain loyal to his election promise of opening up the Iranian society and improving its appalling state of human rights, he ought to deal with the abusers of these rights.

By contrast, Iran’s regular army, violently purged after the “Islamic revolution” by the new regime for its nationalist identity and secular organization, still remains the main military power to protect Iran’s vast borders and keep the country’s sovereignty.

President Rouhani’s reference to the “aspirations of the Iranian people” in his speech should also be read as a warning to the Guards that they now have a choice to make; either they relinquish their illegitimate economic and political power and allow a civil society to develop in Iran, or they face a nation that has no respect or loyalty to them.”

Dr. Behrooz Behbudi, Founder of the Centre for a Democratic Iran