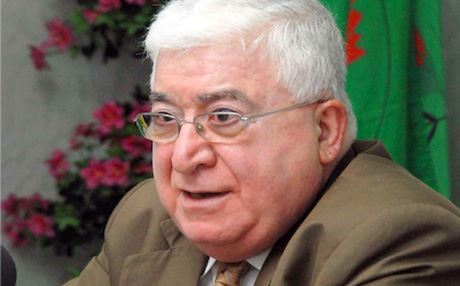 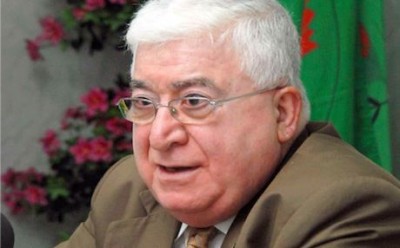 Kurdish members of the Iraqi parliament elected Fouad Massoum, one of the two candidates of the Patriotic Union of Kurdistan (PUK) to the post of Iraq’s president on Wednesday evening.

Massoum’s election by the Kurdish MPs has ended weeks of deliberation by the PUK to choose its candidates for the post.

Both Massoum and Salih are senior leaders of the PUK. Massoum has served as the head of the Kurdish parliamentary bloc in Baghdad and Salih was once deputy Iraqi prime minister and Kurdistan Region’s premier for a two-year term.

Arez Abdulla, a PUK parliamentarian told Rudaw that Salih has accepted the outcome of the vote and congratulated Massoum.

Iraq’s presidential post is reserved for the Kurds based on an agreement between Iraq’s Shiite, Kurdish and Sunni groups.

The Kurds for their part have unanimously agreed to give the post to the PUK.

Jalal Talabani, the PUK secretary general, served two terms as president. He is currently recuperating from a stroke at his home in Sulaimani after he returned from 18 months of hospitalization in Germany last week.

For weeks prior to the final vote on the presidential candidate, critics said that PUK’s inability to come up with a nominee was detrimental to the Kurds in Baghdad where around 100 others, the majority of them Sunni Arabs had nominated themselves for the post.

Meanwhile, Kirkuk governor Najmaldin Karim who is a senior PUK leader continues to defy his party and has jumped into the race by officially nominating himself for the post of president.

About Fouad Massoum
Massoum, a founding member of the Patriotic Union of Kurdistan (PUK) is a self-possessed veteran politician, has been a longtime confidante of Jalal Talabani, Iraq’s current president and PUK head .

Massoum – whose full name is Muhammad Fouad Massoum Hawrami — was born in 1938 in the township of Koye in Iraqi Kurdistan. Both his parents originally come from the Hawraman area, and his father was a notable cleric.

He and Talabani come from prominent religious families and spent their childhood in the same town and remain close friends to this day.

As a teenager Massoum studied at Kurdish religious schools, and in 1958 he began studies at Egypt’s prestigious Al-Azhar University, where he earned his undergraduate and graduate degrees in Islamic studies, and later his PhD.

Massoum was a member of the Iraqi Communist Party, which he left early in his career to join the Kurdistan Democratic Party (KDP) in 1964.

He taught at the University of Basra and was in charge of the KDP’s military operations in Iraqi Kurdistan in the late 60s.

Massoum was a representative of the KDP and Mustafa Barzani in Cairo between 1973-75.
In 2004, he became the first speaker of the interim Iraqi parliament, and the year after he became an Iraqi MP.