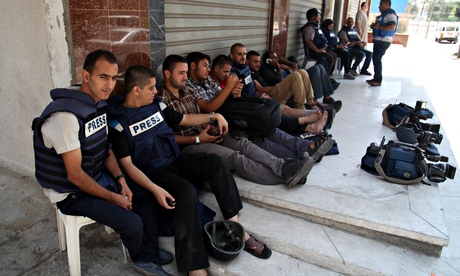 Al-Jazeera journalists evacuate their building after it came under fire in Gaza. Photograph: Majdi Fathi/NurPhoto/Rex Features
Share:
Israel’s army has denied targeting the Gaza offices of al-Jazeera TV after the network’s correspondents reported that the building had come under fire on Tuesday.

Staff in Gaza said their 11th floor bureau was hit by two Israeli bullets as a crew was preparing to broadcast live from the balcony. “Two very precise shots were fired straight into our building,” said Stefanie Dekker. “We are high up in the building so we had a very strong vantage point over the area. But we have evacuated.” Al-Jazeera aired footage of their staff standing outside the building.

A spokesman for the Israel Defence Forces (IDF) said no warning shots had been fired but could not confirm or deny whether there had been indirect damage to the building from firing at nearby military targets, the Jerusalem Post reported.

The incident came a day after Israel’s foreign minister, Avigdor Lieberman, called for al-Jazeera to be banned.

Lieberman accused the Qatar-based channel of being a mouthpiece for Hamas, and said the foreign ministry was taking steps to prevent it from broadcasting from Gaza, according to Israel’s Channel 2 TV.

Al-Jazeera “has abandoned even the perception of being a reliable news organisation and broadcasts from Gaza and to the world anti-Israel incitement, lies, and encouragement to the terrorists,” he said.

“All the big networks operate in Israel, some of them are not exactly pro-Zionist, and yet as a democratic state we allow them to operate here. In the case of al-Jazeera it is not an issue of freedom of the media but of a terrorist wing that currently fights against Israel.”

A statement posted on the al-Jazeera website said: “Al-Jazeera network considers statements made against it by Israeli Foreign Minister Avigdor Lieberman a direct incitement. (It) considers (his) comments as a very serious matter. Israel is accountable for the safety of al-Jazeera teams working in Israel and the Palestinian territories.”

Al-Jazeera also reported that Israel’s communications minister, Gilad Erdan, has asked Israeli cable and satellite providers to stop airing al-Jazeera, calling it an “enemy” broadcaster. The request is not mandatory.

Al-Jazeera said: “Our journalists have been doing an outstanding job in reporting to our mass audience in the region what is happening on the ground. A threat to one is a threat to all, and this is a dark sign for all journalists operating in the territory. Journalists must be protected while doing their job of giving the public information they have the right to know, helping them understand what is going on. Journalism is not a crime!”

Al-Jazeera has often come under fire in war zones and been banned, at different times, from almost every country in the Middle East. Its most recent troubles have been in Egypt, where three journalists working for al-Jazeera English were sentenced to between seven and 10 years in jail on charges of aiding terrorists and endangering national security.