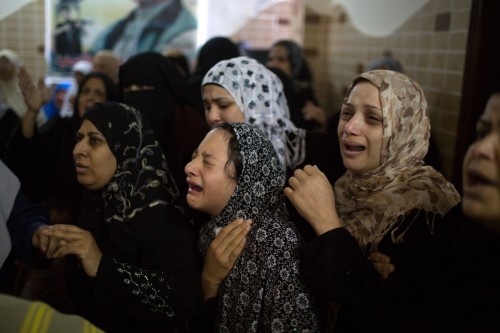 Palestinians prepare to bury a member of Hamas.
Share:

The Israeli military said it foiled an attempt by Gaza militants to infiltrate a kibbutz through a tunnel early Thursday, hours before the two sides briefly halted fire for a humanitarian lull in which Gaza residents tentatively stepped into the streets, hoping to find one of the handful of cash machines that opened for the first time since the conflict escalated July 8.

Two hours into the lull, which began at 10 a.m. local time, sirens wailed in southern Israel and three mortar shells fell in open ground on the Israeli side of the border, military officials said. Israel had threatened to respond with force if militants in Gaza took the opportunity of the temporary cease-fire to fire on Israel, but half an hour after the mortar attack later there had been no Israeli military response.

An Israeli military spokesman said it was not immediately clear if all the militants from the tunnel had been killed. Residents of the Israeli border community nearest the exit of the tunnel, Kibbutz Sufa, were told to stay in their homes for several hours after the initial confrontation, which began around 4.30 a.m.

The Hamas military wing claimed responsibility on its website for the infiltration, saying a group of its special forces had penetrated “enemy lines near Sufa” and came under fire from the air after the “completion of its mission,” without elaborating. Hamas said that all its fighters had returned to Gaza safely. But the Israeli military said the militants ran back toward the tunnel once they realized they had been exposed.

With the Palestinian death toll reaching more than 220, many of them civilians, Israel and Hamas, the Islamic group that controls Gaza, agreed to the suspension of hostilities from 10 a.m. to 3 p.m. on Thursday at the request of the United Nations. The pause was largely meant to allow civilians in Gaza to stock up on supplies. Lt. Col. Peter Lerner, the military spokesman, said he did not expect the lull to be affected by the infiltration attempt.

As the pause took effect, gone were the thuds of F-16 airstrikes and the smell of cordite that had punctuated days and nights in Gaza. The ripping sound of Hamas rockets, more than 1,000 of which have been fired at Israel since July 8, was also absent.

Many streets in Gaza remained quiet, yet people were unsure how safe things would remain, as they were mindful of how a previous proposed cease-fire on Tuesday had broken down after just a few hours. On the beach near Gaza City’s small fishing harbor, where four boys were killed by an Israeli airstrike as they played on Wednesday, the children who often play there had not returned.

But there was one major incentive for Gazans to head out, with some banks dispensing cash for the first time since before the war began.

The banks have been periodically shut down amid simmering disputes between Hamas, the de facto rulers of Gaza, and the Palestinian Authority, based in the Israeli-occupied West Bank. The authority has refused to pay Hamas employees since forming a so-called national unity government last month.

The banks in Gaza had closed days before the current war broke out, amid a continuing impasse over the salaries, in order to avoid riots that broke out when people discovered that only employees of Fatah, Hamas’s rival party that dominates the Palestinian Authority, were being paid.

Still, the hours before the lull were punctuated with more Israeli airstrikes and rocket fire. The military said that since midnight it had carried out airstrikes against approximately 37 targets, including 15 concealed rocket launchers. Smuggling tunnels running beneath the Egypt-Gaza border were also hit, according to local reports.

The Health Ministry in Gaza reported three Palestinian fatalities early Thursday, including a man killed in an airstrike on a house in Beit Lahiya in northern Gaza, another man, 67, who was killed in a strike while on his way to the mosque for the dawn prayer in Rafah in the south and a woman, 71, who died of injuries she sustained in an earlier strike in Khan Younis.

And before the lull in the fighting, more than a dozen rockets were launched from Gaza into Israel, including a barrage aimed at the Tel Aviv area at about 9 a.m. At least one rocket was intercepted by Israel’s Iron Dome missile defense system and others apparently fell in open areas. There were no immediate reports of injuries on the Israeli side.

Colonel Lerner described the attempted tunnel infiltration at dawn as “a terrorist attack that could have had devastating consequences” had it not been thwarted.

The militants, who he said were armed with extensive weaponry, including rocket-propelled grenades, emerged from the tunnel about 270 yards inside Israeli territory and just over a mile away from Kibbutz Sufa – “a short run,” Colonel Lerner said, adding that the kibbutz, a rural community of about 300 residents, was the presumed target of the attack because of its proximity.

The existence of such tunnels is well known to the Israelis but they are difficult to discover and destroy from the air, adding to the argument of those Israelis who advocate a ground invasion of Gaza.

Eyal Brandeis, a member of Kibbutz Sufa, said the residents received text messages at about 4.30 a.m. telling them to stay in their houses. “From the sound of the explosions we understood this was a grave incident,” he said by telephone. Soon the residents were told that there was a suspected infiltration attempt. Shortly before 10 a.m. they were told they could go back to their normal routines.

Mr. Brandeis, a lecturer in political science at Bar-Ilan University near Tel Aviv, said the last 14 years had not been easy for the communities along the Gaza border, but that, “Of course, the tension goes up when there is an escalation.”

He said a lot of mortar shells fall without warning in the area. “We just have to stay alert,” he said.